An Expat's Guide to Living in Split, Croatia

Share
Tweet
Save
Already an expat with a helpful tip or story to share?
write for us!
Kathleen O'Donnell
for those interested in

Living in an ancient Roman emperor’s place just a 10-minute walk from sparkling Adriatic Sea beaches in an incredibly safe and welcoming country might sound like it’s too good to be true - but that’s really what living in Split, Croatia is like!

Of course, living here as an expat is different from taking a week-long vacation in this little slice of paradise.

Here’s everything you need to know about expat life from my experience as an American digital nomad and freelance writer living there for a year and a half.

The History of Split, Croatia

Split has a long and fascinating history. The center of the modern city is the Roman emperor Diocletian's Palace - he was from Dalmatia and built the palace as his retirement home. Today the palace is a UNESCO World Heritage Site. This area of Croatia is still today referred to as the Dalmatian coast.

The original walls of the palace remain, and the interior is filled with little medieval homes and tiny alleys. It’s a place filled with Croatian history, but also with plenty of modern conveniences and housing options outside of the small historic city center.

Why I Chose to Live in Split

I actually didn’t come to Split with a plan to stay long-term - I was looking for a European country that would let Americans in during summer 2020, and Croatia was one of the only options.

But I ended up extending my stay from a month to a year because I fell in love with it! And I still hop between Split and my other base in Athens, Greece every three months.

If you work online and don't want to bounce to-and-from Split and another country, they are one of the countries that offer a digital nomad visa. This visa will allow for an extended stay of up to 1 year. Also known as a freelance visa or remote workers visa, every country that offers one has different requirements and conditions. I'll go into more detail further down about digital nomad visas and other ways you can stay in Croatia long-term.

The Basics of Life in Split

Split is the second-largest city in Croatia, which sounds big - but it’s home to just over 175,000 people in comparison to the capital Zagreb’s 2 million. That size makes it easy to explore without your own car, and its central location on the Croatian coastline makes it a great base for exploring the rest of the country, either by day trips or weekend getaways.

Split is also a very popular tourist destination, so almost everyone in the city speaks at least some English, and many speak other languages like German, Spanish, and/or French, as well.

It’s an easy city to navigate without learning Croatian, which is great because it’s a very challenging language to learn. Although, if you happen to speak Serbian, Montenegrin, Bosnian, Slovenian, or Macedonian, you'll do just fine. As these countries were all part of the former Yugoslavia, their languages are incredibly similar.

Split has a great international expat and digital nomad community, so it’s easy to find social events and make friends here. Sometimes it’s too easy - you can spend all your time going for a coffee with new friends and hopping around bars and not get a lot of work done!

Also, Split locals are quite welcoming and hospitable. Between local friends and friends from other countries, you can expect to have a sociable lifestyle if you'd like.

The social scene mostly centers around meetups in the off-season (from around November to April) - join the Expats Meet Split Facebook group to keep up with all of them. If you visit popular expat hangouts like the Daltonist, Charlie’s Bar, or one of the popular coffee spots for working, you’ll be sure to make friends with the many expats fast.

Eating on a Budget

Going out to eat at a restaurant in Split is pretty pricey, but you can have fun on a budget here easily. You can pack a beach picnic, pick up a delicious burek (a pastry with meat, cheese, or veggie fillings) from one of the many bakeries, or have a beer at Matejuška pier for a very cheap social activity.

If you’d like to live like a local, put on a nice outfit and go for a coffee at one of the many cafes on the Riva (the waterfront boulevard) with friends. You can sit for hours over one coffee and catch up on all the local gossip - it’s one of my favorite local traditions.

The Best Neighborhoods for Expats

Split’s center is the palace, which is beautiful, historic, and car-free. However, in the busy summer months the tiny alleys are crammed full of people and difficult to navigate. Varoš is also historic and right next to the old town and full of charm, and popular with expats and digital nomads.

Meje and Spinut are more modern local neighborhoods just a 10-15 minute walk from the center. If you’d like to be closer to a beautiful beach and farther from the busy center, Žjnan or Firule are your best bet.

How to Find Housing in Split

One of the biggest drawbacks to living in Split as an expat or digital nomad is that it’s very difficult to find apartments for a year-round lease in the desirable central neighborhoods because of the tourist crowds in summer.

Local landlords understandably prioritize the high-paying tourists in the summer season - they make most of their money then. And they’re reluctant to rent year-round to an expat because it means they miss out on the summer season profits.

If you decided to live in Split, you'll quickly see how much the average cost of living changes between the high and low seasons. This isn't just the case in Croatia but also in neighboring countries on the Mediterranean Sea, your living expenses will vary depending on the season. Prices will go up as demand does.

If you insist on living in the city center or on the beach all year, you'll need some wiggle room in your budge to cover the differences in monthly costs from low to high season.

How to Lower Your Costs of Living

You’ll need to move to the outer regions of Split to get a decent price on an apartment in the summer, which is a hassle. It’s even a problem for locals. If you have the money to splash out on a beautiful Airbnb then, you won’t encounter problems, but a place that costs $500 per month in the off-season can go for $2,000+ per month easily in the summer. As you can see, if you're not careful, those few months can easily break your budget when the "regular price" is greatly inflated.

Finding affordable apartment rentals in any season is getting harder on Airbnb. I’d suggest joining a Facebook group like Expats Meet Split and asking around once you arrive - you’ll get a better price.

Croatia is a beautiful country and an increasingly popular destination for digital nomads and expats thanks to their new digital nomad visa, but they’re still working out a lot of the kinks in the process and adjusting to an influx of nomads, other expats, and residents.

For a long time, Croatia was a place people moved out of, not into, so their systems are not the best at welcoming new arrivals (like the time the apostrophe in my name broke the computer system at the police immigration desk for 2 days because I was only the second person with an apostrophe to apply for a residence permit).

You can qualify for a residence permit here if you:

Keep in mind, not all residency permits are created equally. Choosing between the best and worst visas in Croatia to stay long-term is an important first step to living in this beautiful country.

You will need a lot of patience and paperwork to get a residence permit here if you’re not an EU citizen. But there’s no tax on income for digital nomads and the country is so beautiful I found the hassle was worth it.

For the most up-to-date information and detailed on the digital nomad visa or other long-stay visas, I recommend you reach out to the Croatian embassy in your city or country of residency.

Quality of Life as an Expat in Split

Split offers a wonderful quality of life for expats and digital nomads. Here are a few of my favorite things I love about Split, Croatia and why I think it offers such a great quality of life:

The weather is mild most of the year except for the heat in July and August, so you can enjoy temperate winters and gorgeous spring and fall weather.

And the beaches in Split are a quick walk away. There’s a massive park right in the city called Marjan so you can enjoy Split’s natural beauty, and lots of museums to soak in the culture too.

Split, and Croatia in general, is also one of the safest places I’ve ever been. I walk around at 3 a.m. all the time with no issues at all. As a solo female traveler, this is a huge relief!

Just keep your head on a swivel and keep in mind some basic safety do's and do not's and you'll be good to go!

It’s also an easy place to get around without a car. Split’s center is very pedestrian-friendly, and there are plenty of buses to take you further out as needed or cheap Ubers.

And you should definitely explore the rest of Croatia as well - living in Split makes that easy!

I hope you love living in Split as much as I do! 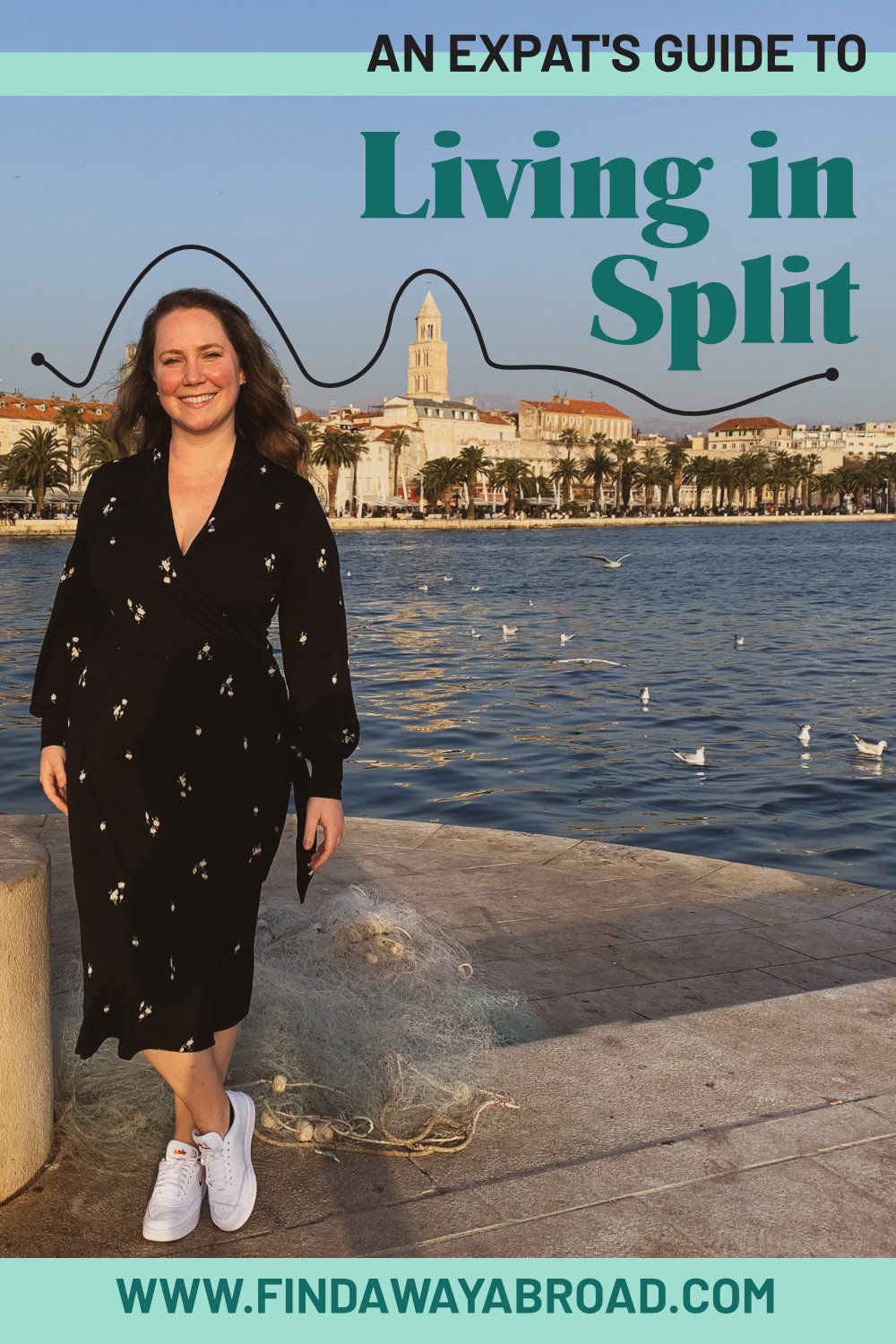 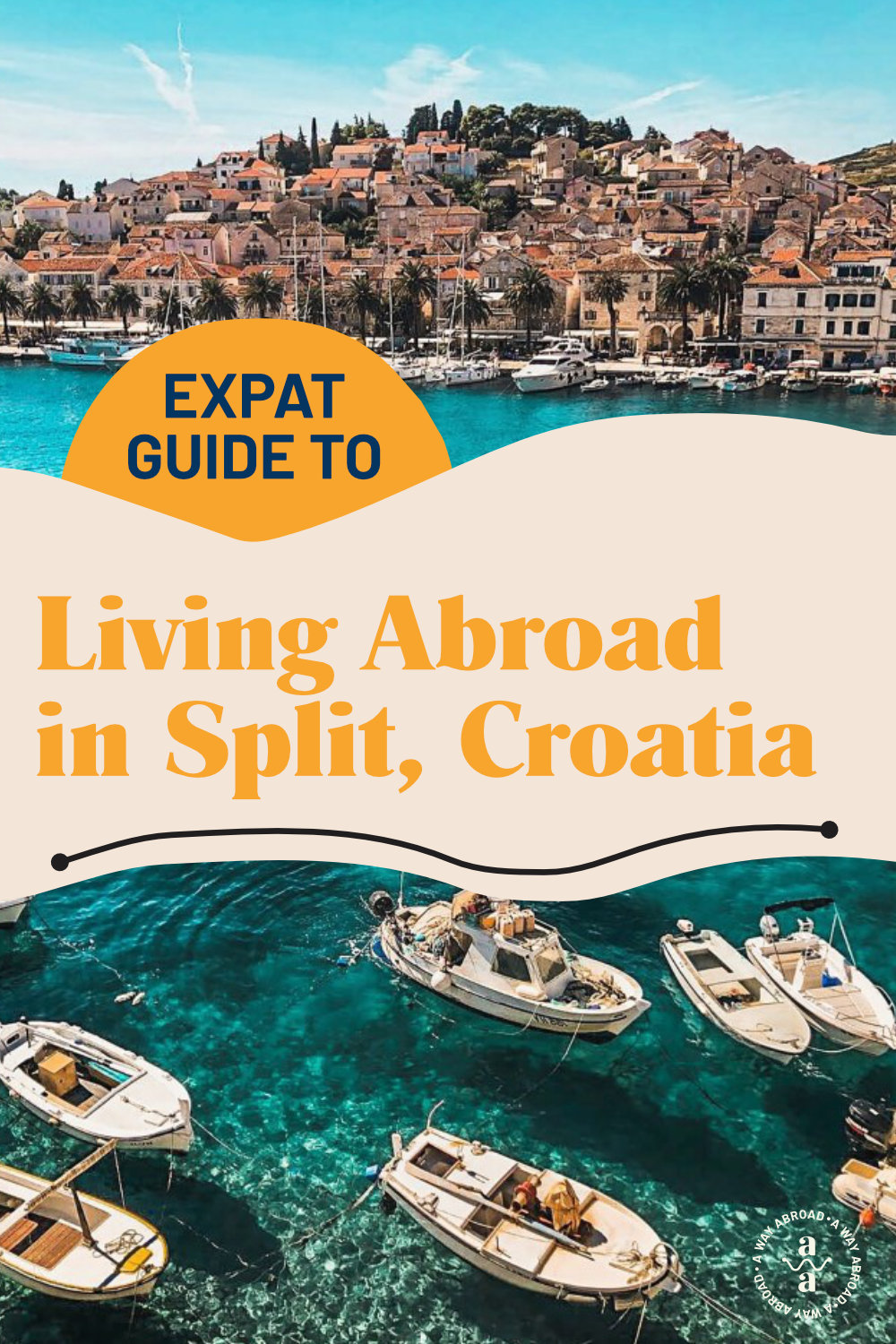