Moving to Germany? Hamburg Should Be at the Top of Your List

Share
Tweet
Save
Already an expat with a helpful tip or story to share?
write for us!
Chelsea Brooks
for those interested in

When people think of visiting or moving to Germany, the top places tend to be Berlin, Munich, and maybe the Black Forest. I get it – the first two are huge and famous metropolis cities, for its history and alternative vibe (Berlin) or Oktoberfest (Munich), and the Black Forest being known for its beautiful nature and the iconic cake named after it.

But there’s another large city that I would highly recommend putting at the top of a person’s list: Hamburg.

Hamburg is a city-state in northern Germany and is actually the second largest city in Germany after Berlin. Being a port city as well – it’s the third largest in Europe – it attracts many international visitors and residents. Although lesser known than it's more famous neighbors, it's consistently ranked as one of the best places to visit in Germany.

I fell in love with this city when I moved here in 2018, coming first from the middle-of-nowhere Midwest, USA and then to a smaller German town, Hamburg was just what I needed to find the balance between German culture and international opportunities.

Where can you live?

In large German cities, neighborhoods are typically divided into Bezirke (districts) and broken down further into Stadtvierteln (city quarters/boroughs). If you're though craving a smaller city in Germany with better access to nature, you might love living in Thuringia.

In Hamburg, there are 7 districts and 104 boroughs. That seems like a lot, but you don’t have to know them all. Residents in Hamburg tend to know a handful of them, which orientates them when talking about the city.

However, the most important aspect is that we tend to pay attention to as Hamburgers is the central lake called the ‘Alster’, which comprises the Außenalster and smaller Binnenalster. (Fun fact: they’re artificial lakes!) Many people refer to where they live in terms of which direction from the Alster it is.

E.g. if someone lives in the neighborhood Eilbek, they might say they live east of the Alster to be a bit more general.

With this in mind, there is a common notion that the West side of the Alster is the ‘cooler’ area to live, especially when thinking of university students or young professionals. I’ve heard this joke many times and you can actually see it play out in Ebay ads where people tend to name their preferred neighborhoods for finding an apartment and they’re all located on the West side of the Alster. For this cool reputation, people also pay the price, either financially or in the amount of space that they get for the budget they have.

It all just depends on what is most important to you – price, vibe, nearby nightlife, food options, connectedness? All of these things can vary considerably based on location.

Cost of living in Hamburg and average income

Did you know that Hamburg hosts the highest density of millionaires in Germany? Luckily, this doesn’t have much of an effect on the rest of us.

Salaries are about 12% higher in Hamburg than the Germany-wide average, which is €3,810 per month. The average income in Hamburg is €4,270 per month, with the lower average being €1,080. Of course this depends on the field, level of education, and experience.

I once interviewed at a job in Hamburg where they were very transparent about how they came up with their initial salary offers. They used a table with one axis corresponding to education level and the other axis corresponding to years of experience – but of course you should negotiate at the end of the day if this does not meet expectations.

Hint: If you are a non-EU citizen and working in Germany, just be aware that you need to earn a certain salary or above to meet the requirements for most visas.

Do I need to know German to live in Hamburg?

Short-term answer: not at first. You can get along just fine in English for everyday tasks. It’s uncommon that northern Germans in general can’t speak at least conversational English, let alone in a tourist city like Hamburg.

Long-term answer: you should make learning it a priority if you plan to stay longer than a year or two. If you see a permanent residence visa in your future or even citizenship, you will have to prove that you have a certain level of language skills anyway.

With Hamburg being quite an international city and tourist destination, you can get along with English just fine. However, if you want to live there long term and ‘settle’, then obviously you should make more of an effort. There are plenty of places where you can take courses, from the affordable classes with 20+ participants at Volkshochschule, to the pricier intensive courses in small groups that you can find at places like the Goethe Institut. Or you can even start with some online courses – there are plenty of options!

There’s something for everyone and every interest in Hamburg.

Do you like techno and raving? Head to PAL. ‍

Are you looking for the LGBTQ+ scene? Head to any bar on the Lange Reihe or some of the bars on the Reeperbahn.‍

Do you prefer chill bars where you can talk with your friends and enjoy the ambience? Check out some of the places in Eppendorf and Eimsbüttel. ‍

Are you ready for a crazy night out filled with drinks, dancing, and music? There are lots of popular places in Sternschanze or the Reeperbahn, especially the Hamburger Berg.

Some other fun things to do in the city:

My must-visit restaurants, cafés, and bars in Hamburg

Käthners 23: This restaurant is an absolute hidden gem. It’s located in the Barmbek neighborhood and it’s basically in the middle of a residential area. The hook is that they have a rotating menu that changes every 2 weeks based on locally-sourced ingredients they can get. The decor inside is eclectic and reminds you of a thrift store. Definitely book a table ahead of time and enjoy this local treat!

Südhang: This restaurant and wine bar is one of those places that you always walk past and think ‘I should go there, it looks nice’ but for some reason you never go in. Well this is your sign to finally do it! They have a lovely wine selection (which you can also purchase by the bottle in their downstairs shop). Their menu is quite small, but it’s very good and prepared in such a lovely way. It’s perfect for a cozy, romantic date or a fancy night with the girls.

The Special Connection: Whether you just want a coffee or a full brunch, this place is wonderful. Inside, they have a bright but cozy interior with plenty of plants hanging around. When the weather is nice, they have beach chairs outside where people can sit and enjoy the sun (when it’s out) with their coffee. The location is also right next to the harbor, so it’s a perfect prelude to a day exploring that area of the city or walking along the Elbe river. Added bonus: it’s super instagrammable with their cute decor and dishware.

Drip Bar: This local favorite is an actual hole in the wall. Seriously – the first time I went there, I nearly missed it because it’s so inconspicuous. The bartender even told me that they don’t do any external advertising, just word-of-mouth. Well here’s the word: go! They have super delicious cocktails and the bar gets its name from the way they infuse their own alcohols. It drips slowly over many hours, similar to how cold brew is made. I won’t give away too many details, but make sure to make a trip there if you can.

Finding a job in Hamburg as an international

I think looking for a job is equally nerve-wracking in any city.

I would recommend checking the typical job search websites such as Linkedin, Indeed, and StepStone.

Besides those sites, there are several large, international companies stationed in or around Hamburg that are popular with expats and international candidates because they are HQs or just use English as the company language. Companies such as Airbus, Beiersdorf, and Statista.

There are also many marketing and advertising agencies in Hamburg that work with international clients, so you can filter the results on one of the job search websites to be in English language (or whichever language you want) and really narrow down where you may want to apply.

Helpful apps to have

HVV: HVV stands for Hamburger Verkehrsverbund and they run all of the bus, U-Bahn, and S-Bahn lines in the city. We use the app to get more accurate timetables and destination planning than with Google Maps. You can also buy tickets within the app so you don’t have to navigate the grimey machines at the stations.

MOIA: The ride-sharing service for Hamburg. (Also in Hannover.) It’s like Uber Pool, but the electric, German version.

Too Good To Go: They enable people to pick up unsold food from restaurants and markets. You get a surprise bag of food at a discounted price.

Gorillas/Flink: Gorillas and Flink both promise to deliver you groceries in 10 minutes. It’s great if you’re sick or just don’t feel like buying the necessities once in a while. They don’t have everything that a normal supermarket has, but it gets the job done in a pinch and the prices aren’t any higher.

StadtRAD: The biggest bike-sharing system in Hamburg. There are bike stations all over the city and it’s very affordable.

I could hype up this city all day, but we have to keep it real because no place is perfect.

The biggest con that any Hamburg resident will warn you about is the weather. It is extremely rainy and gray in this city for a majority of the year. It’s estimated that there are about 187 days of the year where it rains, which is just over half the year. (Make sure you have a raincoat and strong umbrella!)

Because we are so far north, what I always tell people is this: the highs are high and the lows are low.

Summer is great because we get up to 17 hours of sunlight per day and you can enjoy a sunlit evening until about 11pm on some days. But in the dead of winter when it’s the exact opposite and we’re getting 17 hours of darkness per day, it can feel so draining and depressing. (That’s why most of us take vitamin D during this time – as prescribed by our doctors, of course.)

A big pro in my opinion is the well-connected public transportation system. In Hamburg we have U-Bahns, S-Bahns, buses, regional trains, and the airport.

Did I miss any of your burning questions about moving to or living in Hamburg? Let me know!
‍ 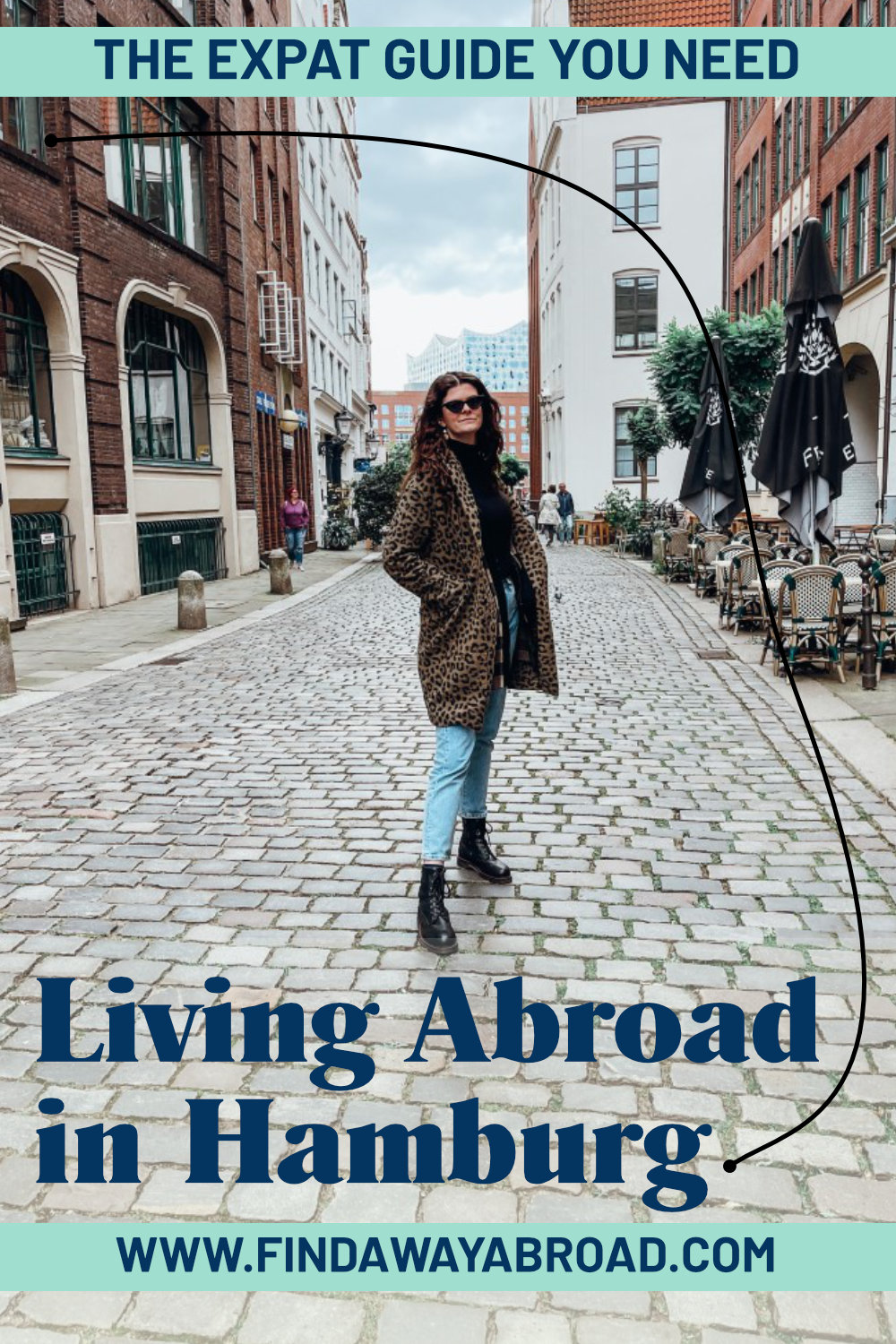 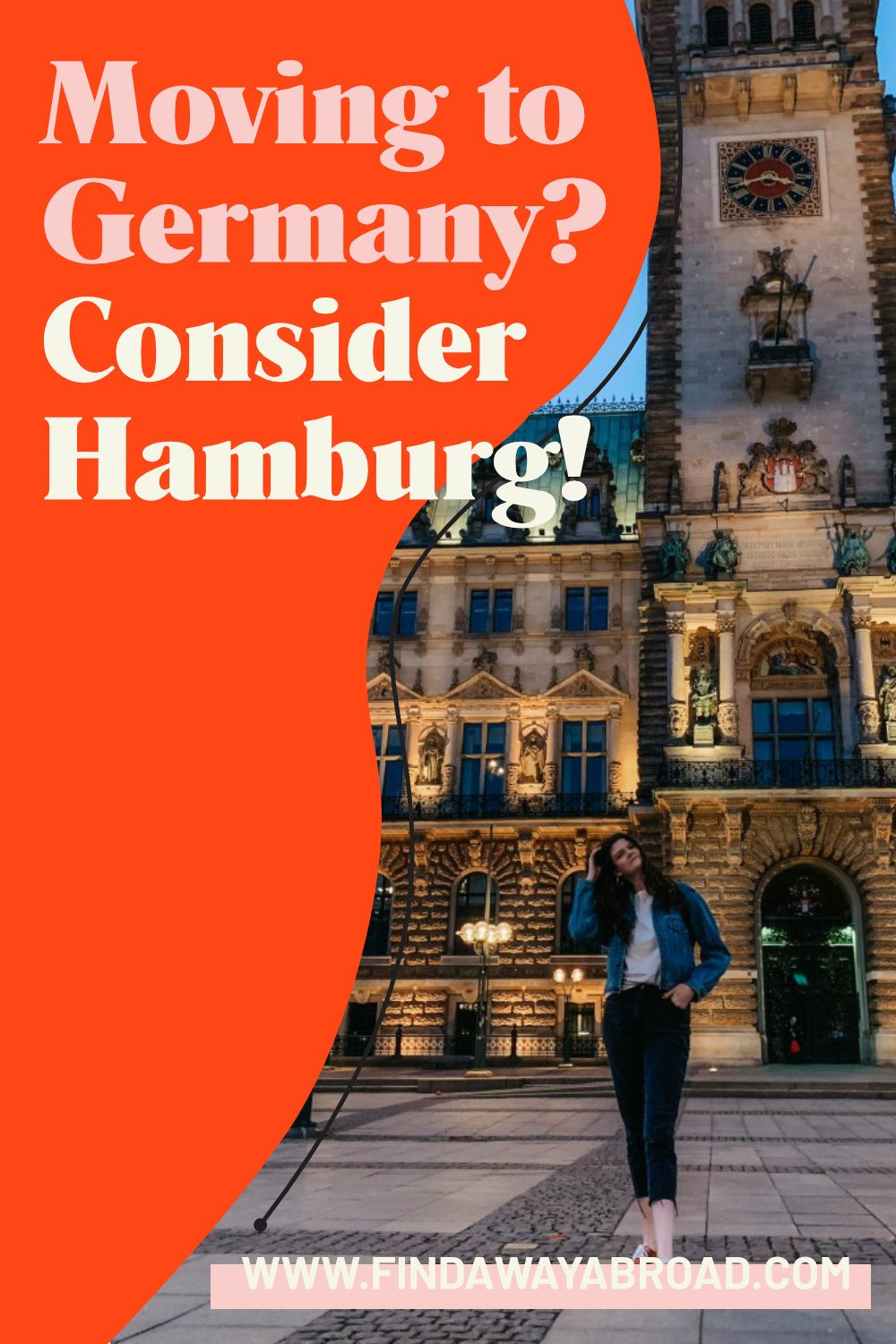