An Expat Guide to Living in Thuringia, Germany

Share
Tweet
Save
Already an expat with a helpful tip or story to share?
write for us!
Katie Mitchell
for those interested in

I relocated to Germany in 2020 and moved around a lot before I landed in Ilmenau, a small town in the eastern state of Thuringia. I’m willing to bet you haven’t run into Ilmenau, or the next largest city, Erfurt, when planning your trip through the country.

Off the beaten track, other expats and myself have ended up in Thuringia for jobs, family, and university – which has allowed us to explore a much less touristy side of the country. As an important cultural state, Thuringia is famous (at least within Germany) for it's long history, incredible nature, and welcoming locals.

Thuringia has a population of 2.1 million people, and many live in the state capital, Erfurt. Other larger cities in the state include Jena, Gera, and Weimar. Thuringia also boasts of being the birthplace of many famous Germans – including Johann Sebastian Bach, Johann Wolfgang von Goethe, and half of the German gold medalists in the 2014 winter Olympics!

You most likely think of living in Berlin or moving to Hamburg when dreaming of a life in Germany and while you might not have known about this central German state before, I highly suggest you consider it as your next home abroad.

Whether moving here for work or by choice, here's what you'll want to know before packing your bags and buying your flight.

Where to Live in Thuringia

The main cities that expats relocate to are Erfurt and Jena – usually for their lauded university programs and then after graduation, they stay because of the region's beauty.

If you like to go out on the town and enjoy events, then Erfurt is the place to be! Consider living in Altstadt (translates to: “old town”) to be in the city center and the middle of the fun.

Erfurt was once an important city in medieval times and because it avoided much of the bombing during WW2, a lot of it's history is well-preserved. You'll be surrounded by historic buildings at every corner and just a short drive outside of Erfurt are plenty of impressive castles.

If you're chasing a city oozing with German charm, the capital of Thuringia, Erfurt, could be perfect for you.

If you want to be closer to nature and a young, outdoor-oriented community, Jena is your best option. Jena is the second largest city in Thuringia after Erfurt and has a bustling student scene. The university has many English STEM master's and Ph.D. programs, so it draws dedicated graduate students globally.

Nestled in the hills, the city is in a prime location for exploring the Thuringian Forest.

Apartment hunting anywhere in Germany can be tricky, and there are usually two options for newcomers:

WGs are popular for young people well into their 20s and early 30s and can be a great way to make new friends and keep living costs low. The people living in the flat will often hold interviews for prospective roommates – flatmates are seen as an element of their social lives and treated as such.

But if the idea of flatmates sends you back to memories of chore charts and fighting over the dishes, then perhaps a one- or two-bedroom flat is a better route. There's a competitive market for flats in the city, so the process of interviewing and touring may take a few weeks or months to find the perfect fit.

Websites to check for flats and open rooms are WG Gesucht and ImmobilienScout24.

Fun Things To Do in Thuringia

If you move to Thuringia, get ready to go outside! There are clubs and some nightlife in the cities, but the real gem is the easy access to nature.

When I first began researching Thuringia, I went straight to Google Maps and was impressed by how much green there is. It’s known as the Green Heart of Germany and deserves the name! As one of Germany's most beautiful regions, it's hard to want to stay inside on your day off work or class.

A paradise for hikers and mountain bikers, the Rennsteig Trail, the best-known long-distance trail in Germany, also weaves through the state.

On the weekends, locals lace up their shoes, grab their bikes or climbing gear, and head into the forests and Hainich National Park. Hainich National Park is a UNESCO World Heritage Site and truly a natural paradise. Two towns that people frequent are Ilmenau, where I live, and Eisenach.

Unlike other parts of the world, nature can be accessed easily with public transportation, making it unrestricted for anyone to hop on a hiking trail.

The Boring but Important Bits

One true stereotype about Germany is the bureaucracy can be frustrating. Depending on why you’re in Germany, for work, school, or family, and where your home country is, you’ll need to take many trips to the foreigners’ office (Ausländerbehörde) for your visa.

People from the United States are allowed 90 days visa-free in the Schengen Area, so you can apply for your visa once you’ve arrived. You most likely know which visa you'll be but if you didn't yet know, Germany is one of the European countries with remote worker visas.

The good news is the visa and residency process in Germany is well documented and they’ll be able to explain all of the steps to you methodically. The more difficult news is this process will likely be explained in German. I recommend bringing someone with you to help with the translation process if you don’t have a strong handle on the language yet.

Looking Back in Hindsight

After living in Thuringia for two years, I feel grateful to have spent so much time in a place where the pace of life is slow. The work life balance in Germany is taken very seriously, and leisure time is prioritized.

If I could go back to 2020, I most likely would have worked to get my German driver's license and bought a car for road trips to fully take advantage of our central location. Otherwise, I recommend investing time into learning at least basic German and making friends!

Thuringia has fewer international tourists than other states in Germany, so there is less emphasis on learning and practicing English here. This means that it's beneficial to you and your time in Thuringia to take a German class.

You can take courses at Volkshochschule, or the “people’s school,” and there is one in every town. These schools act like a recreation centers - there are classes for everything from cooking and swimming classes to German and assimilation classes for international folks.

These courses are meant to teach you the language efficiently and are also a great place to make new friends! If you’re in Germany for a shorter stay, you can apply for a language-learning visa by taking these classes.

Quality of Life as an Expat

To be an expat is to usher the unknown into your daily routine. And living in Thuringia is doing just that!

Germany is centrally situated for travel through Europe by plane or train, and Thuringia is well positioned in Germany for this as well! While there are no international airports, it is only a 2–3-hour train ride to most major airports! This makes flight price comparisons a dream.

When you talk to most expats here about their favorite element of their time in Thuringia, they say it is the people. I’ve found great friendships in the international communities and with Thuringians by exploring my passions and inviting others to join.

The great thing about Thuringia is that because it is not as well-known as the large cities like Berlin or Hamburg, the living costs are much lower.

For quick reference, you can expect to pay:

The one pricier element of living in Thuringia is the trains. Because it’s situated so centrally, you’ll spend a lot of time traveling to exciting cities in Germany. However, this is where they get you. A one-way ticket within 50km of your departure city in Thuringia can be as low as 6 euros, but trains to neighboring cities and states can cost up to 100 euros one-way. It’s worth investing in a BahnCard, which will reduce the costs considerably.

One involuntary cost is also health insurance. German health insurance is top-notch, and you can choose from two public companies for coverage – TK or AOK. They calculate the cost based on your salary or a fixed fee of around 100 euros per month for students.

Ready to Move to Thuringia?

Regardless of where in the state of Thuringia you decide to move to, from Erfurt or Jena, to the smaller towns of  Ilmenau or Eisenach, living in Thuringia is an ideal place to live if you're chasing a great work-life balance, easy access to nature, and a lower cost of living while still calling Germany your home abroad. 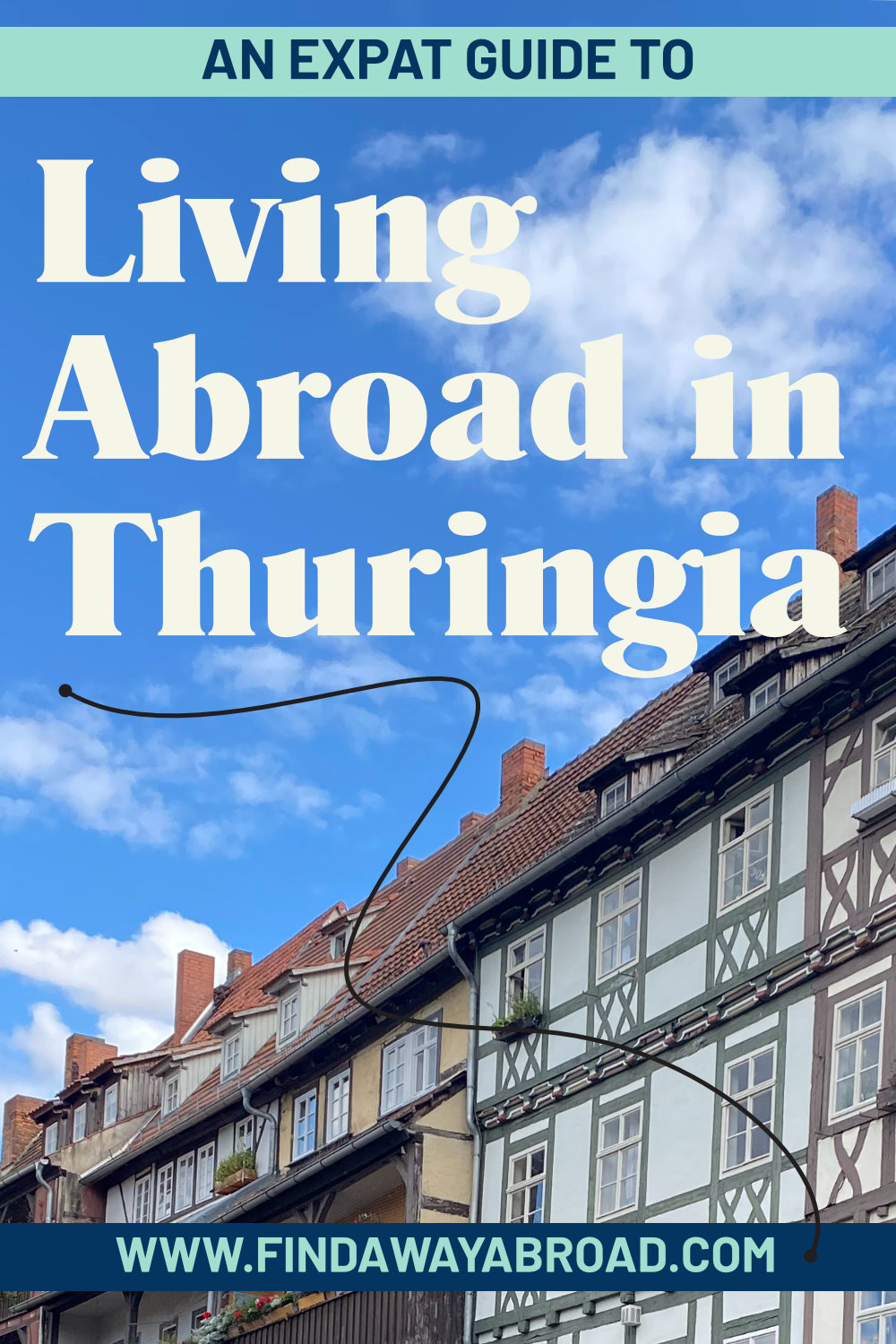 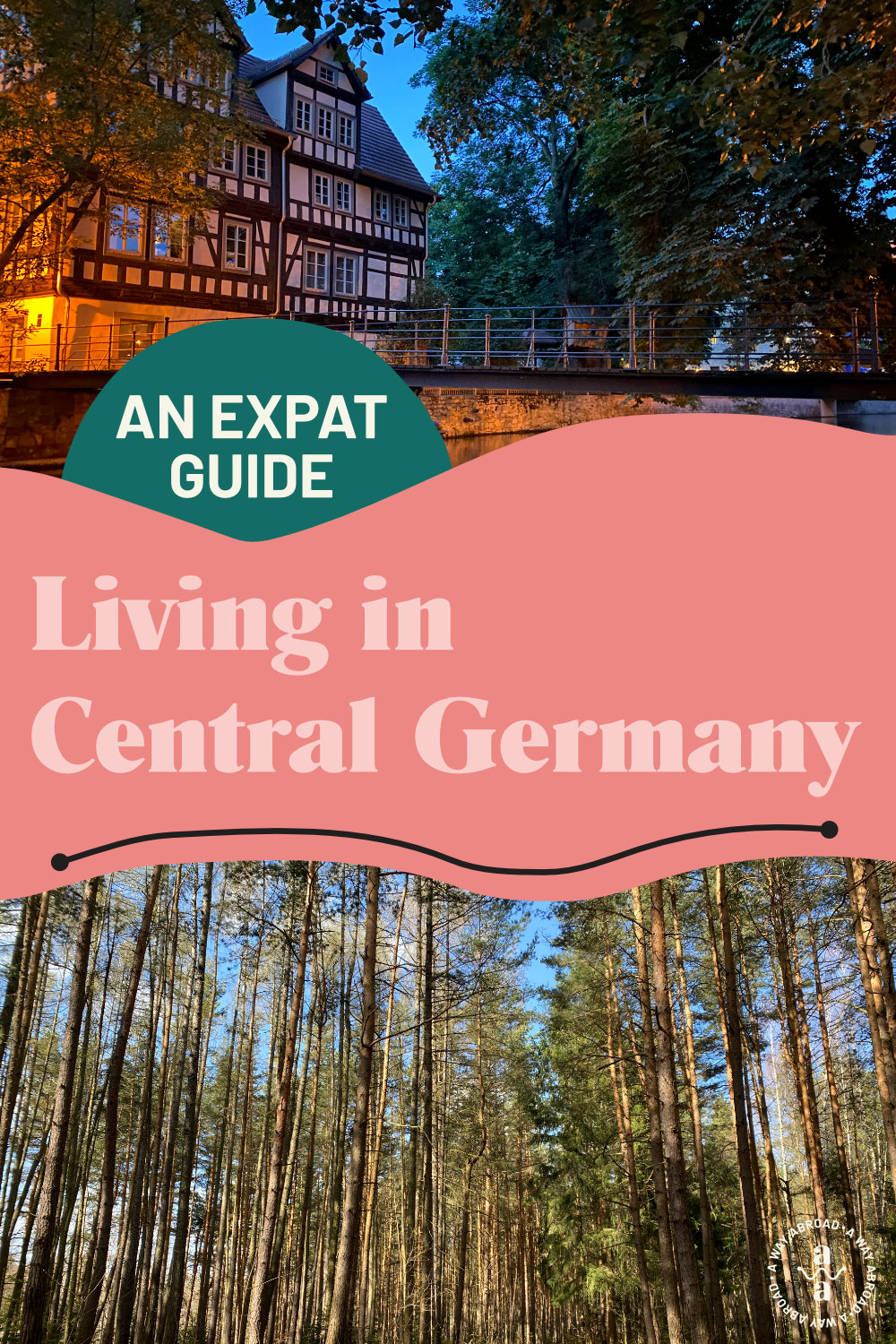