3 Big Tips to Getting Hired in Your Dream Job Overseas

Share
Tweet
Save
Already an expat with a helpful tip or story to share?
write for us!
Brittany Conyers
for those interested in

Work hard, be kind and be yourself: How these three tips helped one girl make her dream of moving abroad a reality

Right now, we are in the middle of a global pandemic. If you were planning to move abroad or trying to figure out how to make the jump, it’s likely that your plans have halted or changed in some way. And that’s okay. Everything is uncertain and unknown right now.

I graduated from university towards the end of the financial crisis. I remember feeling panic and dread as I got turned down over and over again for job interviews. How would I pay back my mountain of student loan debt? Would I ever find a job I like? Was I even smart enough to get a real job? Was I going to be broke forever? Would I ever realize my dream of living abroad?

Find out first if moving abroad is right for you!

Fast forward nine years and I have now been living in London for nearly three years. I work in a job that’s pretty close to my dream job and, when the world isn’t on lockdown, I get to travel and see new places all the time. Whether you want a job to drive your way or find your own path, you can follow these 10 steps to help you move abroad ASAP.

When I think back to the nervous 22-year-old-me, I am so proud of myself for not giving up and so thankful for a few little decisions that changed the trajectory of my life.

Decisions that have allowed me to be right where I was meant to be – trapped in my one-bedroom little flat in London with light flooding in and my British boyfriend cooking breakfast while I write.

So, how did I get here? There’s no rule book or guide (wouldn’t that make it a lot easier?!) and definitely no set timeline to getting what you want out of life. But thinking back on what I’ve learned so far, there are three rules I’ve always tried to live by:

Setting myself up for success

When I was 20, I did a one-month study abroad program in Salamanca, Spain. (If you’re in college, I highly recommend doing a study abroad program if you can!) It was the first time I had ever been out of the U.S. and only the second time I had ever been on a plane. I fell in love with the country, the people, the culture, the vino and the intensity of being in a country where I barely knew the language. I vowed (to myself) that one day I would move back to Europe.

Five years later, I had graduated college, moved back to Atlanta and, after a few months of unsuccessful interviews, I finally landed a job as a paid intern. Not exactly what I was looking for – after four years of college, I was clearly ready for a full-time role. But, with a little luck (one of my bosses was pregnant and they needed maternity cover) and lots of hard work, my internship was extended and soon after I was offered a full-time job.

Two years later, I was promoted. Life was pretty good. I loved the company, my boss and the people I worked with. I had been able to travel some while in the job too – Germany and Switzerland (where our European headquarters were) and a few other places. Those trips re-ignited my desire to move to Europe and I started to make it known that one day I would like to transfer overseas. But, at that company, it wasn’t a very regular thing to move people around – especially not someone in the first five years of their career.

Fast forward another three years. An old boss of mine had posted about a job at his new company on LinkedIn. I hadn’t been looking, but something piqued my interest when I clicked through.

I reached out, but it turned out the London job wasn’t available (nor would they have moved a new manager across the globe having never met me). BUT there was another role in Atlanta that he thought I would be good for.

A promotion, a change and the chance of one day going to London…. I interviewed and got the job.

It was a tough transition for me; I had been at my old job for five years, had loved the people and the company and was doing strategic, important work that I enjoyed. In this job, I was new, I was junior and I was not yet feeling like I was doing strategic, important work that I enjoyed. Six months in, after a few tears had been shed, I got a call from my old boss. My old role had opened up and they were upweighting it to a manager role. Oh my god. My stomach was in knots, I made 75 pros and cons lists. I cried. I talked to everyone I knew to get their advice. I turned it over in my head a million times.

But ultimately, I didn’t go back. I had only been at my new job for six months, I needed to give it a chance. And in the back of my mind, I knew that I had much better odds of moving abroad at this company than I ever would if I went back.

Not sure you can get an international transfer? Working Holiday visas are a great way to live and work abroad by legally being able to find a job in your host country, without the job having to sponsor you. Consider getting a Working Holiday visa in Australia, New Zealand or Japan.

Fast forward another six months. I’m on vacation with my then boyfriend and receive an internal email about a job in London (a mass email – it wasn’t that easy!). We talked about it, I did some digging but it wasn’t the one for me.

Another three months later, a new job– similar to the job I loved at my old company, but a bigger role – comes open in London. I find out about it because of a connection I made with a colleague who was visiting from London earlier that year. My first month at the company, she was in town and had asked to go for a coffee. We instantly hit it off and during that conversation, I had told her about my dream to live abroad. So when this job came open, she thought of me.

The job didn’t come looking for me and it didn’t just land in my lap. I spoke to people, I made my ambitions and my dreams to live in Europe known to everyone I met.

Go ahead and do the leg work and get your resume updated and in tip-top shape. Pro tip, people outside of the U.S. call a resume a CV, but don't worry, it's all the same.

And I asked. I’ll never forget pacing back and forth in front of my old boss’ office before going in to tell her I wanted to apply. I’ll never forget writing and re-writing the email I sent to apply or the excitement and terror I felt when I landed the job.

I also can’t pretend that it was all on my own – I had friends who supported me, my family was (mostly) supportive and my then boyfriend also had similar dreams. To be honest, I am not sure that I would have had the guts to move across the world all by myself and so when I got the job, he fortunately also got one.

There were lots of other circumstances at play, but ultimately, we moved to Europe together (albeit to different countries) with plans to live here together and that got me through the fear and doubt I felt during the transition. In the end, things didn’t work out with us and we broke up quickly after we got here. But I don’t think either of us would have had the guts to make the move without the other.

So like I said, a little bit of fate and a little bit of luck. A lot of knowing what I wanted, being kind, making connections and working hard. Always asking and always seeking out opportunities that might get me closer to my dreams. Relying on people I loved and trusted. And never letting anyone else decide for me.

Those months on my own when I first moved here, before I had made good friends or really built a life in London, taught me more about myself than the last two decades had. Moving a world away from my friends and family, breaking up with a long-term boyfriend and starting a new job in a new country all alone, I had to learn to be by myself.

That’s not to say that it wasn’t hard being so far away (and that it’s not still sometimes hard especially right now under lockdown), but I am so happy with the choices I have made – the easy ones, the hard ones and the downright scary ones. Because they all got me here.

In London, I have gained so much and learned so much. Every morning on the train, I can hear six different languages on my way to work. I love diving in and finding hidden gems in London I never would have had the time to find if I was only on vacation. I uncover a new British phrase every week and I’ve gone from the 20-year old who had only flown twice to a 31-year old who has been to 31 countries and has a list of double that that I want to see. I’ve fallen in love with travel, with new friends, with old friends and I’ve fallen in love with a man who is perfect for me – because I am finally me.

So what’s my advice to you? If your dream is to live abroad one day:

For all the people that have helped me, I’ve always tried to help others just as much – I love editing resumes or sharing jobs with people and you never know when you’ll need the favor returned.

Things don’t always happen on the timelines you set for yourself and with the world in such an unknown state, that’s going to be even more of the case. But don’t stress about the unknown. Life is short and the runway is long.

Work hard, be kind and be yourself. (And I hope you too are blessed with the same little bit of luck and fate that I found!) 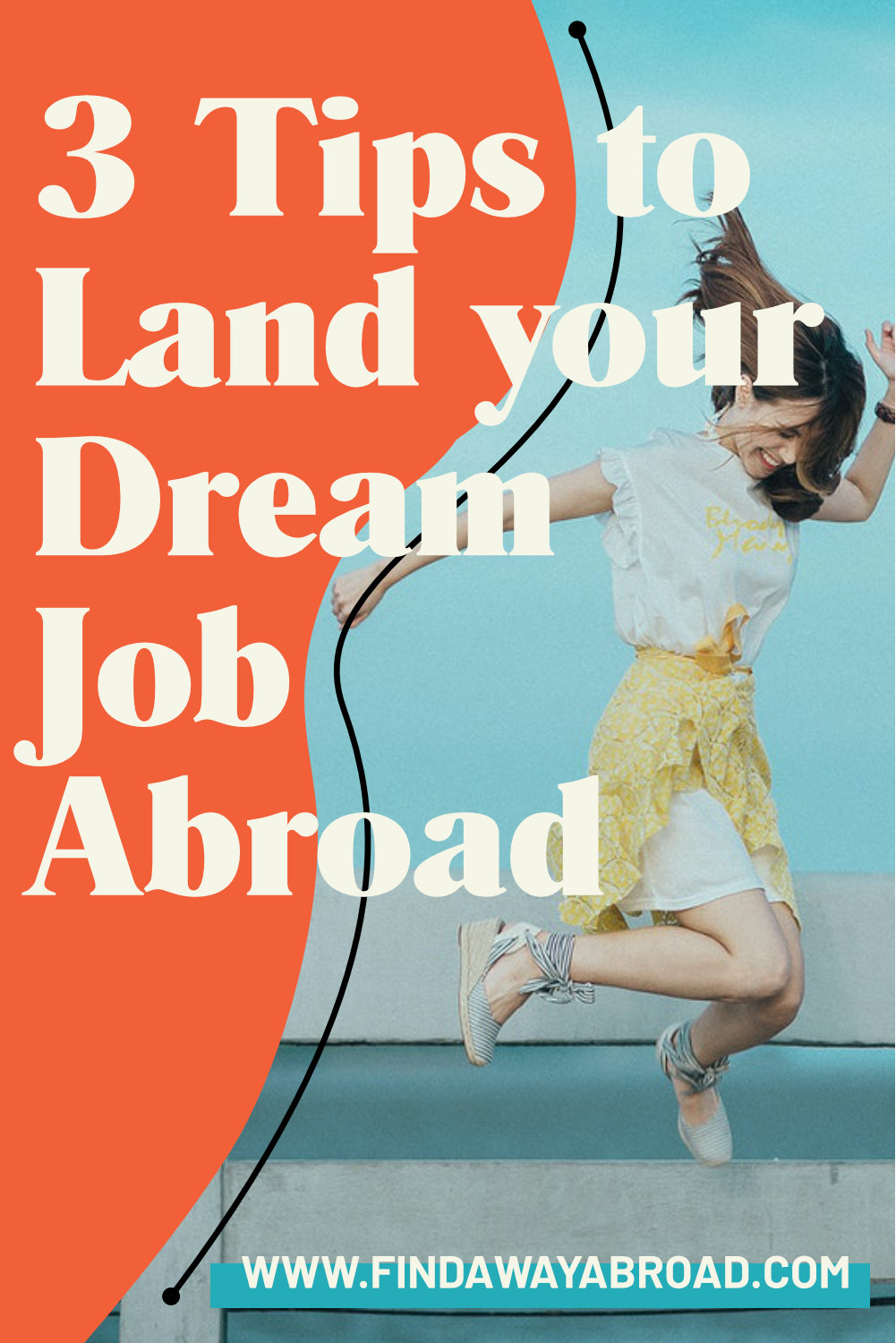 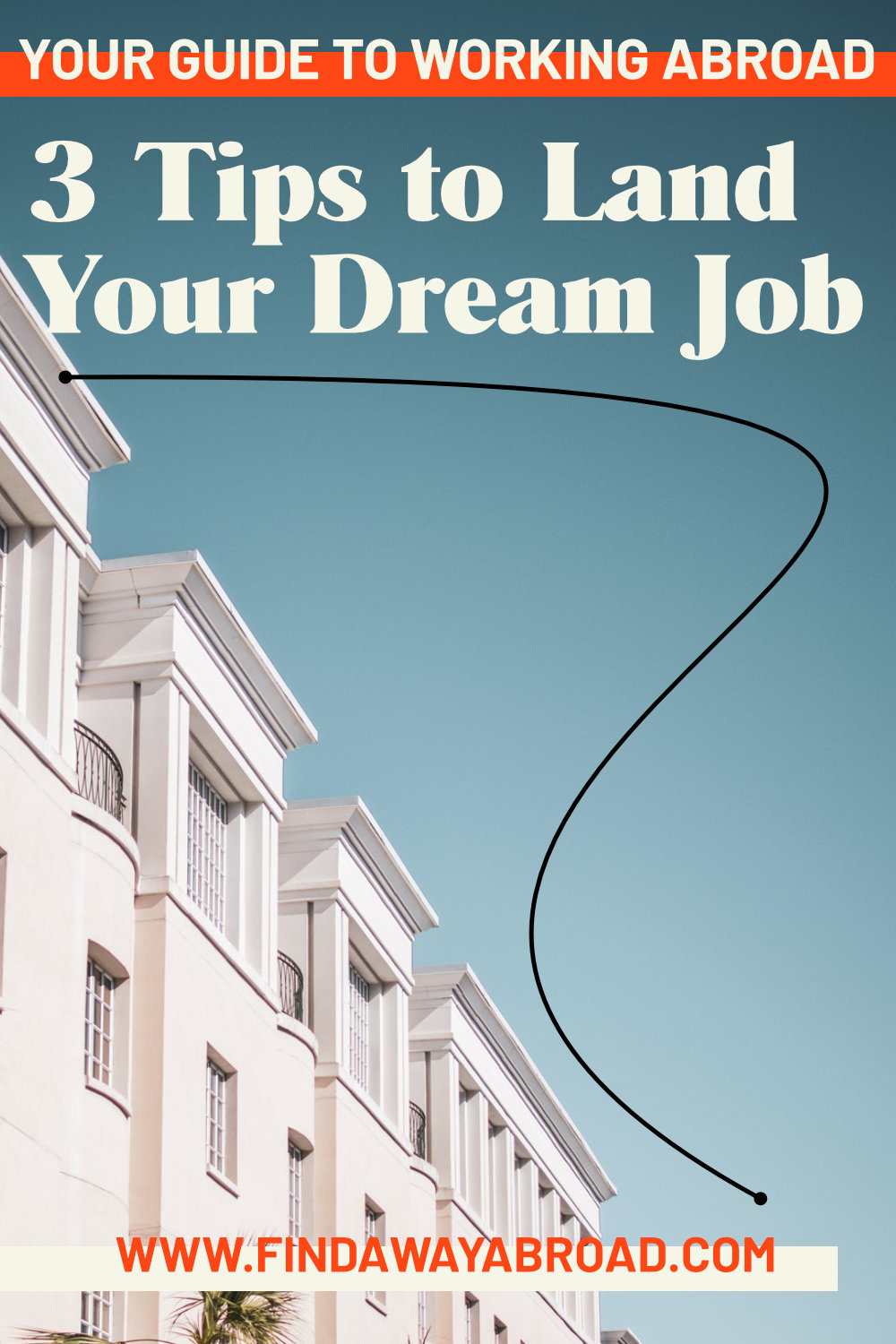