An Expat Guide to Living in Taipei, Taiwan

Share
Tweet
Save
Already an expat with a helpful tip or story to share?
write for us!
Katy Liang
for those interested in

Recently voted the best city to live and work abroad in 2020, Taipei is an obvious choice when it comes to your next move.

Taipei is the capital city of Taiwan, a city small in size yet packed with more than 2 million residents.

While life here can be fast-paced and busy, its central location in East Asia makes it the perfect gateway to easy and affordable travels whenever wanderlust calls. For many expats, the metropolitan offers a high quality of life, with all of the buzz and glamour and none of the price tag. Plus, the country of Taiwan is a beautiful island that holds a wide variety of outdoor adventures when you need a break from the city.

At the same time, pockets of old-time gems and diverse food options from local and afar expose travellers to a whole new world of cultural exploration and discovery. With an openness towards newcomers and a friendly atmosphere, it won’t be long before you find yourself feeling at home.

If you're not quite sold on Taipei but do know you want to live in Asia, check out A Way Abroad's guides about living in Hong Kong, Jeonju, Ho Chi Minh City and Singapore.

Settling into Life in Taipei

Best Neighbors to Live in

Deciding where to live in Taipei can be overwhelming for the newly arrived traveller and expat, as there are Taipei City and New Taipei City, with dozens of districts between them. A good idea is to first book a hotel in one of the 7 best neighborhoods in Taipei to get a feel for life in that area before signing a lease.

Simply put though, New Taipei City is the municipality that surrounds Taipei City in the center. The more central you get, the heftier the price tag for accommodation and food options.

That said, rent is still much more affordable than many urban cities around the world. An older, shared apartment can go as low as NT5,000 ($150USD) per month, while a newer studio loft typically goes for NT20,000 ($650USD) or more per month. Listings can be found on Facebook groups and the local site, 591.

A general rule of thumb is to find a place to stay close to an MRT (Taipei Metro) line. There is no shortage of 7-11s, clinics, shops and even night markets around the MRT for your daily conveniences. The efficient system of metros and busses easily connects the greater Taipei region and will make your commutes a breeze.

In particular, the Tamsui-Xinyi Line, or the Red Line, is ideal for expats and travellers to find accommodations.

The line ends in the financial hub, Xinyi District, where the iconic skyscraper Taipei 101 and ultra-luxurious department stores are.

On the other end of the line is the suburban and waterfront Danshui District, a popular choice for those to like to be close to nature. In the middle, there is the centrally located Zhongzheng District, where you can hop on a coach, train or High-Speed Rail at Taipei Main Station and travel anywhere on the island.

Alternatively, Guting, Taipower Building and Gongguan stations on the Green Songshan-Xindian Line are good options for students and a younger crowd. These stations are home to several universities and Mandarin learning centres, attracting many foreign students on exchange.

How to Get Around the City

Public transportation is the way to go for most of your travel plans. You can download the Go! Taipei Metro app to plan your trips and check up-to-date bus times. Both the MRT and busses have English announcements. The MRT stations are well-marked, with helpful staff on-site, and most stations have multiple exits so you don’t even have to cross the road!

Another quintessential way of getting around Taipei is the scooter. How else are you able to experience freedom and fumes?! I joke, but the scooter is a popular means of transportation for being efficient on gas while ideal for weaving in and out of Taipei’s narrow roads and heavy traffic.

More horsepower doesn’t equal more speed in this instance. Driving a car can sometimes take you longer as you dodge the scooters and circle around trying to find a parking spot. Nevertheless, this shouldn’t be a problem if you take a taxi or Uber. Affordable and easy to flag down, the drivers are known for getting you to places in record time, albeit sometimes at a dangerous speed.

Finally, there is YouBike, Taipei’s public bike share system. Stations can be found near MRT stations and parks, making it a great option for errand runs and riding leisurely along the city’s many riverside parks. Most recently, there is also the option to rent a Gogoro electric scooter with GoShare.

Get an EasyCard to Make Your Life Easy

As its name suggests, the EasyCard makes your life much easier as the one card that enables you to get around and even shop with a single tap.

It is essential for living in Taipei, as EasyCard payments are accepted across the entire public transportation system. Aside from paying for your fares, it can also be used to make purchases at many shops and restaurants throughout the city. The EasyCard can be purchased at the service desk inside an MRT station and can be loaded at the stations as well as at convenience stores.

Taipei is a hub for creatives and digital nomads. With internet connections easily accessible and a huge community of expats, the possibilities are endless. However, English teaching is the most common job for expats in Taipei. Positions range from teaching English as a foreign language to English literature. Even though teaching is what most expats choose to do, it's possible to get a non-teaching job in Taipei.

If you do not have a prior education background, you should try teaching at cram schools (afterschool learning centers). Cram school teachers are generally paid hourly and do not require teaching credentials. These positions can be found on Tealit.

Most private and international schools, on the other hand, offer salaried positions with monthly stipends for housing and transportation. They may be more selective with their teachers’ qualifications. Positions are advertised on their websites and at international school job fairs.

Making the Most of Living in Taipei

Get the Alien Status

Once Taipei has won you over as your next home abroad, you’ll want to start applying for an ARC, or the Alien Resident Certificate. This is a must if you are planning on staying in Taipei beyond your visitor visa, as it is illegal to work on a visitor visa.

You should first apply for a resident visa, which lasts up to 3 months while you seek employment. Once you find a job, your employer is typically responsible for applying for a work permit and helping you with the ARC. The ARC is good for up to 3 years and will entitle you to opening a bank account, getting a Taiwanese driver's license, internet services, etc.

Although there are other options to receive an alien resident card in Taiwan, working in Taiwan will be the most direct route to legally residing in the country. Another popular option is to study Mandarin at a programs offered at one of the many universities in the city.

The best finds in Taipei for me have almost always been accidental. In fact, Taipei’s maze-like streets and alleys make for serendipitous discoveries that make life here always full of surprises. The disorienting feeling is half the fun!

Don’t be afraid to leave the expat bubble and explore local spots. Chances are, the locals are more than eager to show you the ropes anyway.

Among the favourite pastime activities for the Taiwanese is karaoke. You’ll find Ximending with entire buildings dedicated to the people’s penchant for belting out 80s classics, sorrowful ballads, and everything in between. Another uniquely local activity is shrimp fishing (or shrimping for short). Indoor shrimp ponds open late into the night and come equipped with grills for your fresh catch of buckets of shrimp.

Aside from world-famous night markets that overwhelm the senses with delicious smells and pops of colours, wet markets throughout the city open in the early morning and at dusk. Here you’ll be able to find the freshest local produce and pick up a Taiwanese phrase or two. Dadaocheng is an old port in the city where red brick buildings are preserved and converted into beautiful cafes and bistros.

Speaking of cafes, Taipei has no shortage of spots that serve up a good roast with an ambience so cozy you’ll want to stay for the whole day.

In the evening, Taipei is best explored by following the many neon signs that light up the whole city.

For Japanese-themed restaurants and bars, head to Linsen North Road. However, shopping districts such as East District and Xinyi District also have plenty of exciting options. My favourite bistro-bar, Indulge, regularly ranks as one of the top bars in Asia and beyond.

Explore Other Parts of Taiwan

If you live in Taipei, you have to explore neighbouring cities and areas. The island is so small after all, you can easily reach one end of the island from another in 2 hours with the High Speed Rail.

My favourite city outside of Taipei has to be Tainan, the historical and food capital in the southern part of the island. If Taipei is the epitome of a modern metropolis, Tainan is the keeper of ancient stories and traditions. The city has an astounding number of ornately decorated temples, and just as many street food options. Here unique Tainan flavours such as the danzai noodle will wow your palates.

On the other hand, surfers and beach bums will appreciate the sand and waves in coastal towns such as Waiao and Kenting. Avid hikers can attempt Baiyue, or the 100 peaks of Taiwan. Whatever it is you like to do, trust that the small and compact island has got it.

I could talk about Taipei all day, but it’s time for you to pack your bags and see for yourself why it’s a favourite for expats from around the world. Whether you stay for three months or three years, Taipei is the kind of place that one remembers vividly and fondly, for life. 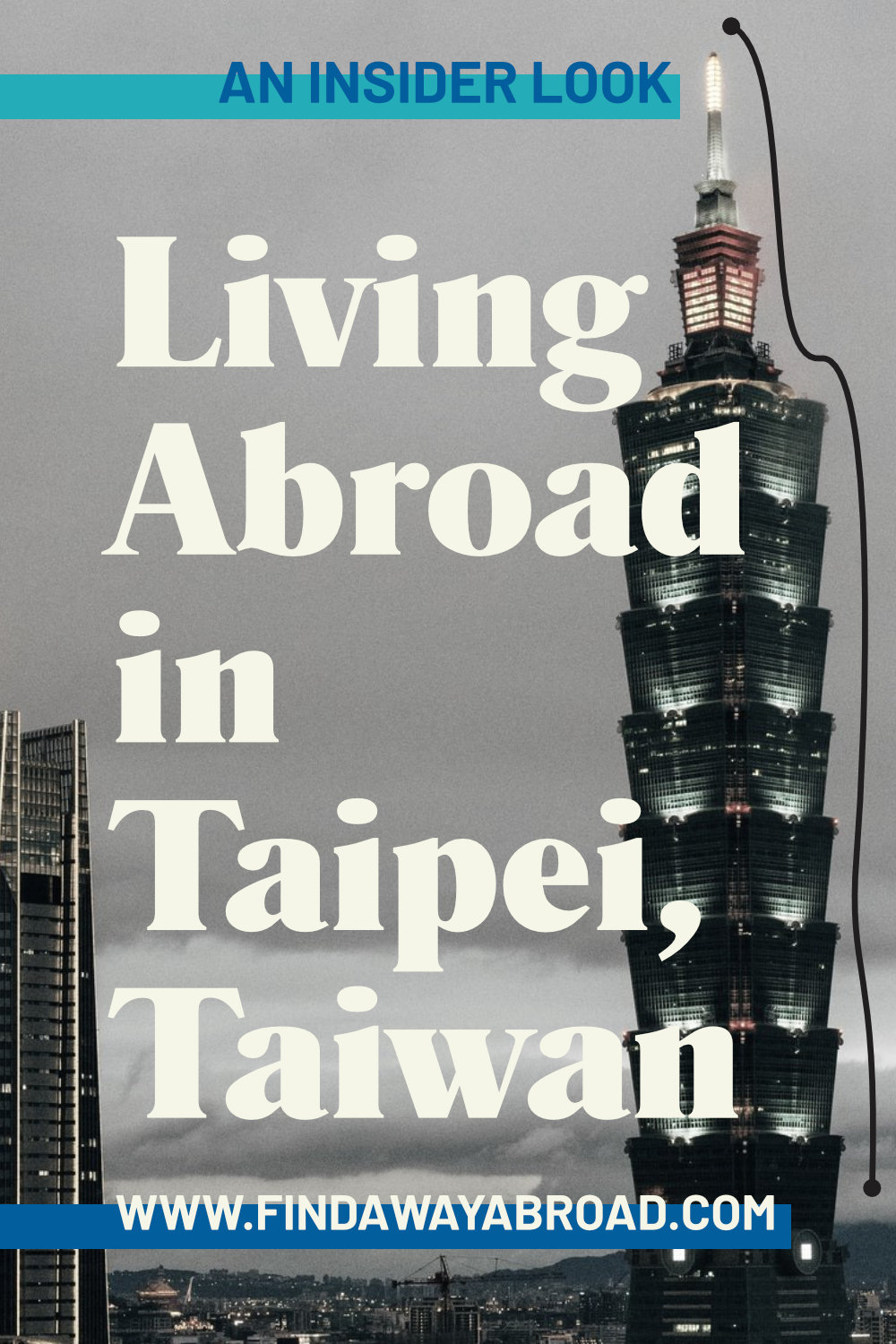 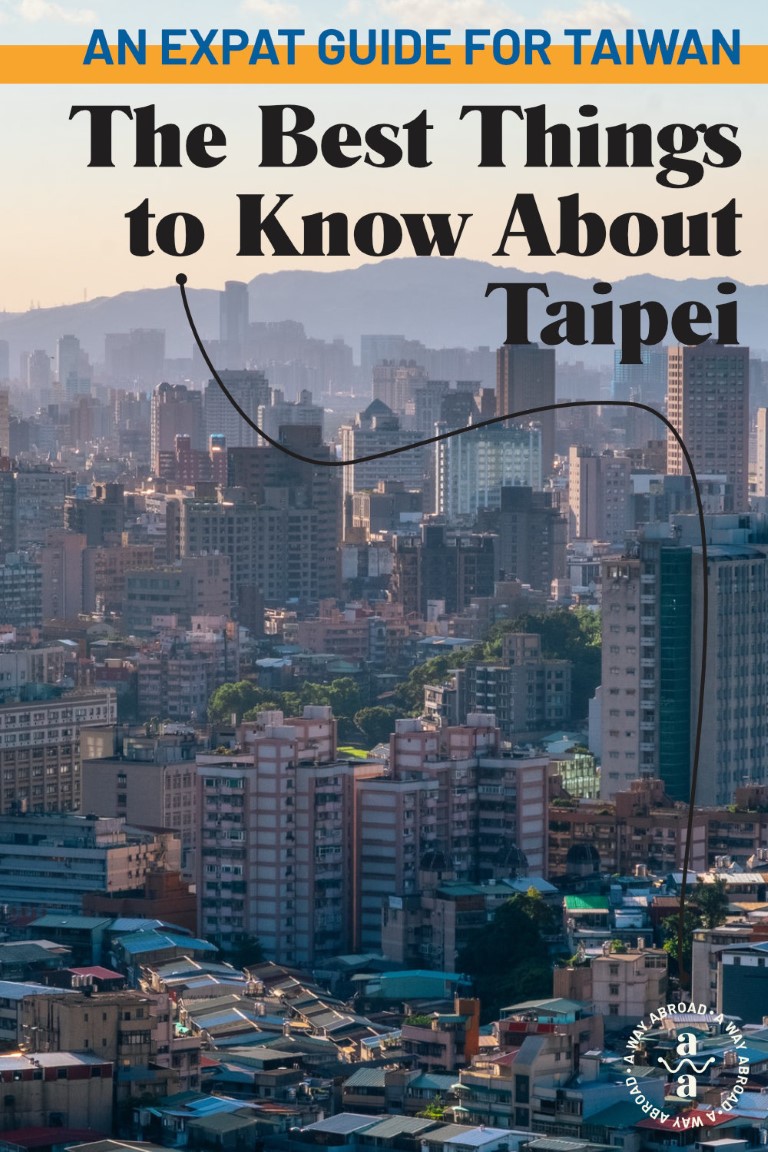