Share
Tweet
Save
Already an expat with a helpful tip or story to share?
write for us!
Kayla Ihrig
for those interested in

Groningen, Netherlands - if you’re not from around here, there’s a good chance you’ve never heard of it before. You might be surprised, but that’s actually not an uncommon characteristic amongst people who end up living in Groningen.

The currents of life bring people to Groningen for all sorts of reasons: job opportunities, like becoming an au pair, the career move of a spouse or even meeting a Dutch partner (that’s how I found myself living in Groningen). Believe it or not, moving to a new country for love is more common than you may think.

Here are 6 things to know if you also plan to move to Groningen, Netherlands

1. Cycling is a must

This perk of living in Groningen isn’t actually specific to Groningen at all. Cycling is a way of life in the Netherlands, but it’s honestly for the best.

Public transit in the Netherlands is well developed and properly maintained, but it’s extremely expensive. For example, a train ride from the Groningen central station to Station Zuidhorn, only a 9-minute train journey, costs €3.24 one way. You ultimately pay €6.48 round trip for 18 minutes on the train. (prices courtesy of the 9292 public transportation app).

Those prices are enough to deter anyone who lives on a tight budget from taking public transit unless absolutely necessary.

But, conveniently, everything within the city itself is accessible by bike. Most destinations are within a 15-minute cycle from the center. On the roads, there are more bikes than cars. In the entire country,  there are actually more bikes than people (source: BBC).

Cycling is a way of life, but everything within the city is close and you can buy a bike as soon as you arrive for less than €100.

If driving everywhere is your norm, then this aspect of living in Groningen may sound unpleasant. You can of course take the test to get your Dutch driver’s license here (it requires lessons, but they’re available in English), but even if you start the process immediately, you’ll still end up cycling or taking public transit sometimes.

Driving is simply not the most convenient way to get around Groningen. Cycling is.

2. You Can’t Avoid The Weather And Climate

Living in Groningen, you’re forced to reckon with whatever is happening outside in a way that I’ve personally never experienced living elsewhere.

Pack a rain suit, wear it proudly (it looks silly), and always throw it in your bag for unexpected downpours.

It’s a wet and dark climate, and there’s no waiting for that pass before you bike to the market.

But beyond the rain, there is an even more powerful weather force: the winter darkness. Being faced with the lack of sunlight in the winter is akin to a dementor from Harry Potter sucking the lifeforce out of you.

This may sound dramatic, but I’ve brought some data to back me up.

On the longest day of the year, those living in Groningen experience 16 hours and 58 minutes of daylight. The sun rises at 5:06 a.m. and sets at 10:02 p.m. Hallo cookouts, beers in the sun and late summer nights.

It knocks the wind out of you. I’ve purchased a vitamin D lamp to help me wake up in the morning, but that’s simply a band aid. If you’re having a final appointment with your doctor at home before you move, I recommend talking about Vitamin D supplements as well.

For a sunnier European city to call home, have you ever considered moving abroad to Florence, Italy?

3. There’s A Local Dialect, But You Only Need To Learn One Word

Not unlike the other provinces of the Netherlands, Groningen has its own local dialect. It’s called Gronings, and don’t worry, you really don’t need to learn it.

Except for one specific word: moi.

But the word “moi” in Dutch means beautiful.

Are you still with me?

The takeaway: when the cashier at Albert Hein says “moi” to you, do not awkwardly mumble back “thank you.” They are not calling you beautiful! They are simply greeting you in the local dialect.

4. It’s Not As Close To Other Major Cities As It Looks

On a map, every corner of the Netherlands looks accessible. After all, it’s Europe’s most densely populated country and it takes less than four hours to drive from top to bottom. Yet, in reality, cities are further away than they look.

A four-hour drive technically isn’t much of a geographical hurdle, but having a car is a luxury that most expats don’t have. In reality, it’s not even a luxury that most locals have. Less than half of the Dutch population owns a car (source: dutchnews.nl).

Without a car, you’ll likely be traveling via the Dutch public transportation network, or via FlixBus. FlixBus is a large bus network that has routes stretching all over Europe.

It’s also cheaper than taking the train, and is obviously more accessible than going and buying a car.

Here’s a quick look at some popular European getaways, all leaving from Groningen on FlixBus. The length of trips can vary, I’ve selected the shortest available route (source: FlixBus):

I would be remiss to not mention that flying is often even cheaper than taking FlixBus. However, I personally only fly as a last resort because of the environmental impact.

The only bit of wisdom I have to offer you about finding good flights is to set your departure location to the Netherlands instead of just automatically selecting Schipol airport. There are many smaller airports that have daily flights around Europe.

Traveling Within The Netherlands From Groningen

If you’re brand new living in Groningen, you may have the itch to explore your new home country before skipping across Europe.

Of course, Amsterdam comes to mind when. Groningen is located 90 miles/145 km from Amsterdam. The train ride is about 2 hours each way, and costs around €50 round trip.

Say you want to travel to a concert in Amsterdam, you’ll likely have to stay the night and pay for a hotel as well given that the trains don’t run 24 hours.

In fact, very little runs 24 hours. Which brings me to the next point.

5. Groningen Does Not Have A 24-Hour Culture

Your options for errands and shopping are very limited after hours in Groningen. And by after hours, I mean after 6 p.m.

Shops, cafes and businesses don’t revolve around the 24-hour economy. There’s a palatable resistance to the business-round-the-clock attitude that the Dutch associate with American capitalism.

Restaurants and bars remain open, and some of them open extremely late. A bike ride through Groningen at 2 a.m. on a Friday is a surefire reminder that this is a young university city.

But, don’t expect a late-night cup of coffee or being able to run out to grab groceries after hours. Night owls: consider yourselves warned.

Even though I personally agree with the ideology behind this, I’d be lying if I said I didn’t miss a late-night grocery run or writing session at a diner at 3 in the morning.

6. The International Community Is Vibrant And Welcoming

There are no shortages of internationals living in Groningen. Just sitting in the city center’s best greenspace, the Noorderplantsoen, you will sometimes hear as much English as you hear Dutch.

It’s not surprising if you look at the numbers: Groningen has a population of about 200,000, with an estimated 25% of that population being students (source: Wikipedia).

Beyond the student population, there are English-speaking workplaces that attract international talent, most notably being the university itself and the hospital system.

Living In Groningen As An Expat - Summary

For a more technical analysis of living in Groningen, you can reference research from the local government. The municipality of Groningen (Gemeente Groningen) conducted researched and published a document in 2017 tackling the question “how can we make Groningen more welcoming?”

Their outcomes were published in this document and does a fantastic job of explaining both the positive aspects and struggles of living in Groningen as a foreigner.

Whatever brings you to Groningen, I hope that you learn to enjoy the aspects of Dutch life that make this place unique. 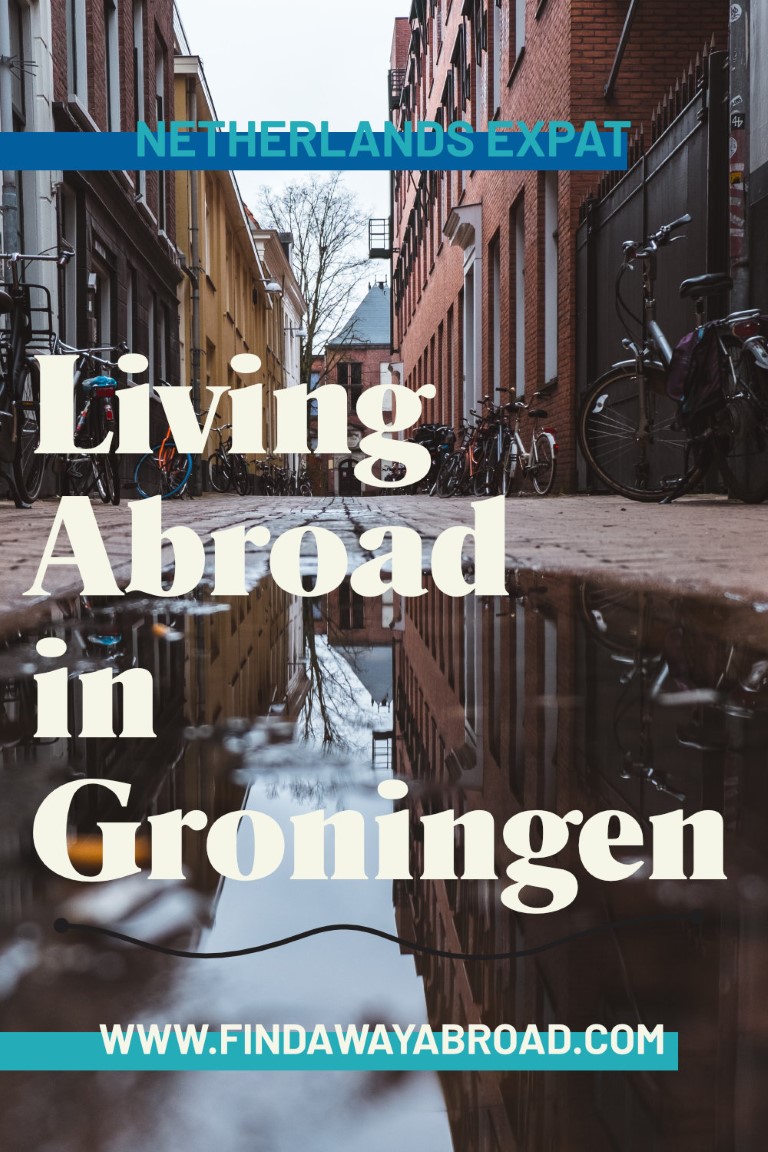 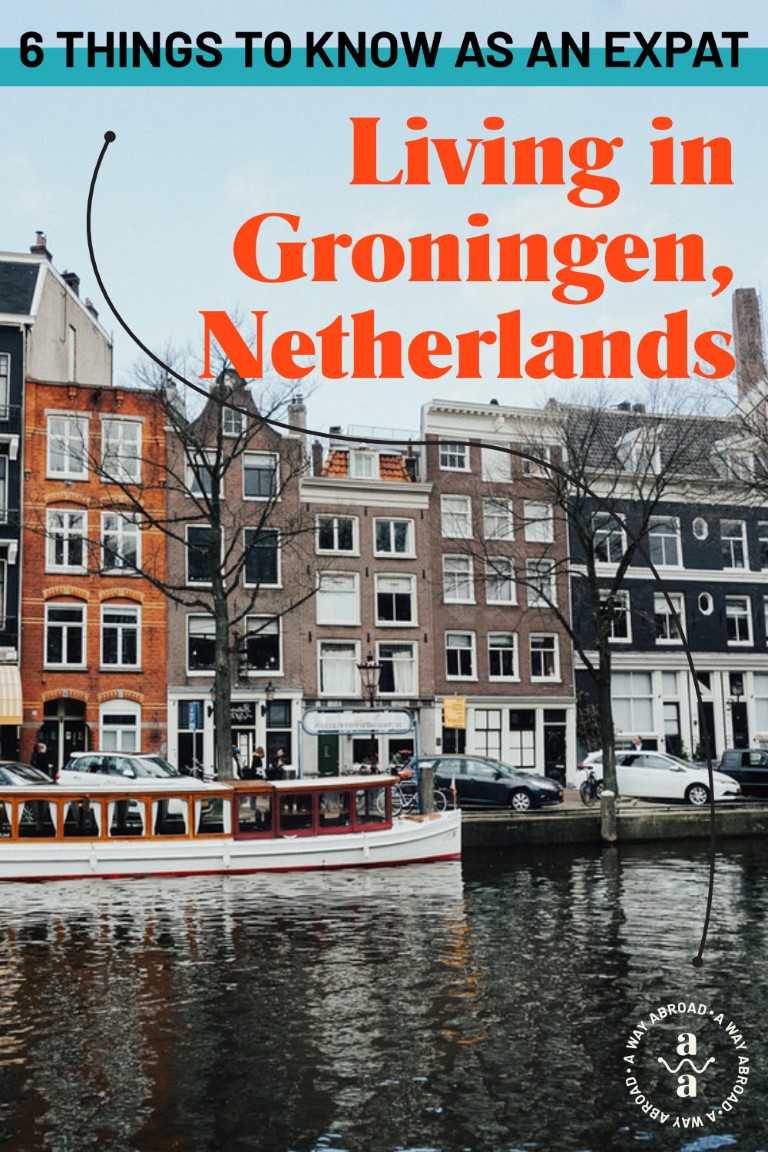