Moving to the Netherlands: Utrecht vs. Rotterdam

Share
Tweet
Save
Already an expat with a helpful tip or story to share?
write for us!
Rosella and Lorena
for those interested in

Let’s assume you have decided to move to the Netherlands and you need to chose between 2 of the biggest cities of the country: Utrecht and Rotterdam. Here is some information and comparisons that might help you decide which could be your next home abroad.

Location of the two cities

Utrecht is the fourth largest city in the Netherlands and it is located in the very center of the country.

Rotterdam is the second largest city and it is located in the province of South-Holland, which is south of The Hague.

Another option you have when moving to the Netherlands is Groningen, a smaller yet very international city in the north of the country.

Thanks to its location, Utrecht is well connected with most of the cities in the country. It’s only a 30-minute ride from Amsterdam Centraal. There are several bus lines, trams and train stations throughout the city so it’s very easy to move around. Needless to say, Utrecht is a bike friendly city, you can reach any corner of the city cycling.

Rotterdam might be a bit farer than Utrecht to Amsterdam. On a regular train trip, it will take you a little over an hour from city to city. You can easily take an Intercity Direct train (the ticket extra cost is between €1,40 to €2,50, depending on the hours you take it) that stops only in Schipol airport and then Amsterdam Centraal to make sure you are there in 40 minutes.

Same as Utrecht, bikes are the main transportation used and the city is well equipped to make the bikers feel safe.

There are several bus, trams and train stations as well and also a metro reaching The Hague. Since the cities are so close to each other, Rotterdam shares an airport with The Hague (Rotterdam- Den Haag Airport). It is possible to reach the city of Dordrecht by water taxi and some other parts of the city can also be visited using this peculiar transportation.

Utrecht and Rotterdam, same as many other cities in The Netherlands, are expensive when it comes to accommodation.

Sharing an apartment could be a cheaper option and is also a great way to meet new people when you are new to this city. Renting a room can cost on average €600, this of course depends on the areas and neighbourhoods you're interested in.

Apart from the city centre, the most common areas in Utrecht are Zuilen, Lunetten and Lombok, which are all bike distance from the heart of Utrecht. Overvecht and Kanaleneiland areas are less popular and therefore cheaper.

Due to their past, they are considered less quiet than other areas, but the municipality is investing in these places trying to revive them so probably things will change in the future.

Out of the city centre in Rotterdam, to spend a bit less on rent, is Delfshaven (one of the few old areas of the city that wasn’t bombed during World War II), Schiedam and Rotterdam South. This last one is still not yet considered one of the best areas so I would not recommend it.

You can use websites like Funda to look for apartments, as well as loads of Facebook groups. Keep in mind that competition is very high, so as soon as you see something interesting make a move and get in touch with the owner.

Finding a job in the Netherlands

Both cities host several industries and start-ups when it comes to work, also for non-Dutch speakers, so you’ll be able to find something at least to get started with. Of course, if you speak Dutch the opportunities will double or even triple.

Some of these agencies that help with job placement are: Undutchables, Adecco, Job Vision, Randstad Uitzendbureu, Manpower, Start People, Tempo Team, and many more.

An insider tip: if you want to increase the chances of getting a job, look also in the cities around (for example, Amsterdam) as they are all well connected and it’s easy to commute. If you get to work in Rotterdam you can also have a look in Delft for a job.

If you're interested in moving abroad to the Netherlands to become an au pair, don't miss out on this detailed guide to get a job!

Fun things to do

Last but certainly not least, our favourite things to do in each city.

Utrecht is a very lively city so you can always find fun and nice things to do.

First thing to check off your Utrecht bucket list: climb the Dom Tower and enjoy the view - it’s 112.5m high and it’s considered the symbol of Utrecht. When the sky is clear, you can also spot Amsterdam from there.

*As of December 2020, the tower is currently under construction.

I also suggest to just walk around in the city centre, get lost in the narrow and picturesque streets to admire the wonderful scenarios that this city has to offer.

There are also several museums which you can visit, such as the Central Museum for art, design, fashion and history. The Railway Museum (Spoorwegmuseum), a fascinating place where you can learn about how trains changed the world. Speelklok Museum will take you through the wonderful world of self-playing musical instruments. And yes, there’s so much more.

Up for a meal? You can chose between the big amount of cafes and restaurants  around the city that offer different type of cuisines and environments. One you should not miss is Café Olivier to enjoy a nice beer while seated in a beautiful scenario set in an old church. Another really nice one to enjoy a drink or grab a bite is Menner Potter located in the picturesque old post building in the hear of Utrecht, where the new library opened up a few months ago. Take a walk around and remember to keep your eyes up, or you will miss the beauty of the building.

Rotterdam is charming for its history, the city centre was bombed during the II World War so it was destroyed and rebuilt from scratch. This makes the city the most modern and unique one of all the country. It's enough to walk and admire the peculiar architecture of the buildings and bridges (some of them are an attraction themselves, with the Erasmus Bridge on top of the list).

To have a nice view of the city and the huge port (second largest in the world) you can climb the Euromast and maybe also have lunch or dinner there before or after a nice walk in one of the several parks, like the Het Park, where the tower is located.

It is difficult to advise about which restaurants or cafes to choose, but if I would be asked to make a “must do” list, I’ll probably say Hotel New York (In the past, it was the recovery boat coming from New York to Europe and the only port where they could actually stop), De Pijp, for a real Dutch meal and then get lost in the Witte de Witstraat, a street full of places to eat and drink. If you are in the mood for a beer tasting go to the brewery De Pelgrim in Delfshaven area.

Museums, street art, exhibitions?! If that's what you're interested in, you’ll get as much variety as you want!

After years of Rosella living in Rotterdam and Lorena in Utrecht, we both love the cities we've chosen to call our home abroad. Which city will be the best for you? 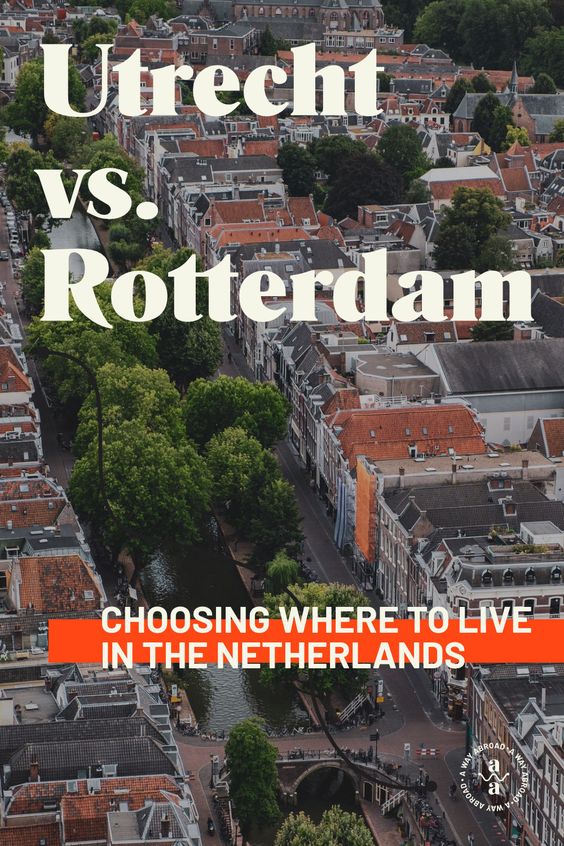 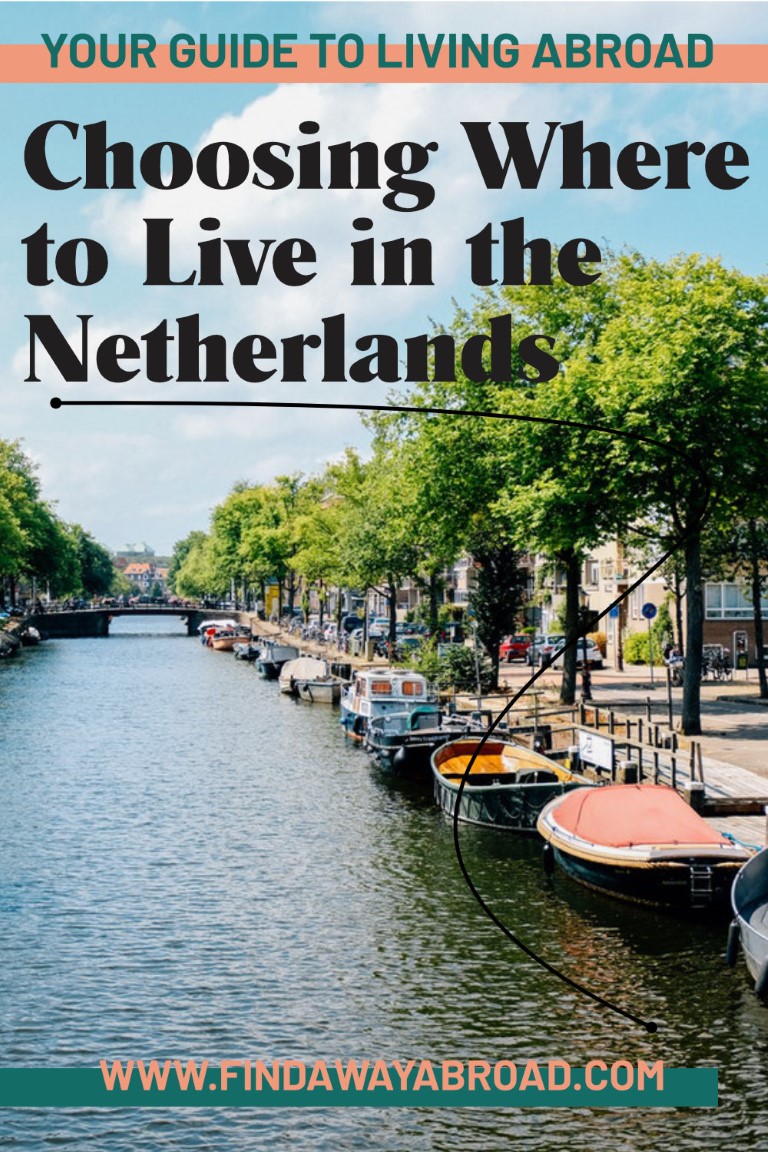