A Guide to Living Abroad in Montreal, Canada

Share
Tweet
Save
Already an expat with a helpful tip or story to share?
write for us!
Marinella Yule
for those interested in

I have heard some great things about Montreal and have visited for a quick trip growing up but visiting for a few days and living in a place is always different.

As a tourist, you hop through trying to see the top attractions and really just scrape the surface of a place. Once you decide to settle down and move somewhere new, that's where the real fun begins!

You start to understand daily life and really get to immerse yourself in your new country's culture- plus you have to deal with things like renting an apartment, getting a job and dealing with work permits and visas. This is why I've loved living in Montreal, Canada so much. Although I've visited here plenty of times, living in Montreal as an American has been completely different than just popping in for a weekend.

Montreal is located near the border of Canada and the United States, a few hours West of Quebec City, and about 7 hours East of Toronto by car. Boston and New York are both around 7 hours by bus from Montreal. And finally, Montreal is 2 hours South of Ottawa.

I find this city very well placed for a long-time solo traveler like myself because being based here means taking getaways isn't too hard to do.

Granted, a 7-hour bus ride is not necessarily a quick weekend trip, but I have done a few nighttime buses on a Friday to Boston and then a night bus back on Sunday. Monday morning is usually a bit difficult and tiring but the thing about Montreal is, it has many lovely cafes with amazing coffee to perk me right back up!

If Canada doesn't work out, consider moving south to the U.S. For a nomadic lifestyle, learn how you can get a job in any U.S. national park or find out how you can get a sponsored visa by teaching at an Indian Reservation.
‍

Areas of Montreal to live

Montreal is similar to many cities in that there are definitely sections. It is hard to see it geographically, but you'll definitely feel it in the vibe. Since Quebec province is mainly French-speaking, there are still a fair amount of English speakers. The more eastern in the island you get, the more French-speaking it is and the more western you go, the more English you'll hear. Yes, believe it or not, Montreal is an island.

Like most big cities, many jobs are located downtown. While it might not be the best area to live in, it is a convenient spot if you work is based here. As you imagined, downtown is full of big buildings and also two well-known English universities: McGill and Concordia.

In Old Port and in Old Montreal, you will find beautiful buildings full of history, as the name "Old" suggests. You can also get a view of the waterfront and the amusement park, La Ronde. There are also several museums that are very informative. I highly recommend you check out these museums when you're new in town.

This fancy section of the city is situated just below the mountain, Mount-Royal, and it is known as the fancy section because the cost of living is quite high. It has also accepted many French immigrants and so many shops have tweaked their products and style of serving to fit more European tastes. It also has a ton of street art! If you want to live in a fancier area, Le Plateau might be the Montreal neighborhood for you.
‍

Commonly known as NDG, this section of town has one of the lowest costs of living in the city. Many immigrants live here and since it's on the western side of the city, it's also very English-friendly.

Just like NDG, Outremont is also another immigrant area that has a cheaper cost of living. It is also home to the Jewish Orthodox community.

This area is well known because it's home to the Olympic stadium. Since it's on the eastern side of the city, more French-speakers live here.

Originally, this area was not very desirable to live in, but recently, it has gone through the gentrification process and is one of the cheaper areas to live. Locals will also say it is one of the most dangerous; however, the news stories I have heard since living in Montreal have been in Le Plateau.

There are many areas in Montreal, but these are the most common ones one can hear while walking the streets.

Cost of Living in Montreal

When I first arrived in late September 2018, I didn’t really know about these different districts. I just wanted to find a nice apartment with nice roommates. I managed to find my first shared apartment in Le Plateau.

Here’s the thing, though Le Plateau is considered one of the more expensive areas of town, overall,

‍Montreal is very cheap for living when compared to other major cities in Canada like Vancouver or Toronto.

A decent two bedroom apartment about 30 minutes from Downtown by metro with electricity, water, and internet can be around $1,000 CAD- furniture not included.

My shared apartment in Le Plateau was three bedrooms, no furniture, everything else included was a total of $2,000 CAD.

This being said, you can also find a one bedroom, no furniture, utilities included for almost $2,000 as well, but that place will have a lovely view and new everything, probably a receptionist in the lobby as well.

There is a lot of discussion that says it is difficult to find housing as there are so many people looking and not enough homes, but I think if you are open to anything and anywhere like me, you will be able to find something.

After five months, I decided to move into my own apartment and after only a few weeks of searching, I managed to find the perfect one bedroom, also in Le Plateau.

When I first moved to Montreal, I was prepared to not be able to find a job due to my lack of French skills...I had none. Within a month, and many job applications later, I got my first job. Later, I decided to change companies and found my next job within 2 weeks of looking.

I write all of this to say, if you are determined, you will be able to find a job even without knowing French. Granted, my profession is marketing and many business opportunities are in English, but there are enough English speakers and English jobs out there in other industries as well.

My main source of resources for jobs was Indeed and Linkedin and for apartment hunting was Facebook groups and Kijiji (similar to Craig’s List). For Facebook, you just have to search for apartments, co-share, etc. with Montreal- many will pop up!
‍

Things to Do in Montreal

Once housing and the job is settled, there are so many things to do in Montreal! In the summer, there are numerous activities outside- parks are full of music and laughter, festivals are ongoing throughout the city, and patios are open among the different bars, cafes, and restaurants.

There are also lots of things to do outside Montreal such as National Parks- summer and winter. You'd be surprised how many great, free things there are to do in Montreal, so even if you're on a budget, you definitely won't get bored.

In the winter, the excitement doesn’t end, so long as the cold doesn't scare you! There are more festivals, Christmas markets, and winter sports. One can do cross-country skiing or skating within Montreal city! There are also numerous ski resorts close by.

Getting a Visa to Stay

In order to work, a work visa is required. Once you have a work visa, one can apply to become a permanent resident and then a Canadian citizen. A lot of the requirements for this process will depend on your past experiences (for example, if you studied in Canada or Quebec province) and your nationality.

If you are looking to just hang out for a month, depending on your nationality, you don’t need to apply for a visa, a regular on-arrival tourist visa is sufficient to rent an Airbnb.

If you are applying for permanent residence or citizenship in Quebec province, you will need to pass a French exam.

Once you have legal status to stay in Montreal, either be it as a refugee or permanent residence, you can take French classes at several locations. There is a government run program completely free or different public schools around the city that offer part-time French classes for really cheap.

I took French classes for 16 hours a week for two months when I first moved to Montreal. It is quite immersive, but French isn’t necessary to live. If you have a job in English, you can spend most of your life without being around French. The same is true if you are a French speaker. There are plenty of people who don’t speak English after living in Canada for years.

The classes are helpful, but to be truly immersed in the language, it is up to the person to find people who speak that language outside the classroom.

Other things to know before you move to Montreal

It is a public healthcare system and involves a lot of paperwork! You also have to wait over a year for a family doctor via the public online system or go to a walk-in clinic. Due to my stubbornness, I called many clinics until I found one that was accepting new patients. After 6 months, I had a family doctor.

The metro and bus are quite extensive. Sometimes the snow can cause problems or the metro has problems, but otherwise, things run smoothly and there is always a way to get there without a car. Having a car in Montreal is a bit difficult. The parking situation is complicated unless you're willing to pay to park most places.

Make sure the boots have enough grip at the bottom for snow and ice. And, come with an open and hungry mind for the history, language, and food!

Quebec province has a very interesting history from the French to British to Canadian then with the language police. They have also wanted to separate from Canada for awhile. The French language is a beautiful language and everyone who lives here should try to learn it! This being said, Quebec French is different than European French. The accent difference is quite striking once I started learning the language and I can understand why the French make fun of the Quebecois- even though it is rude to do so.

I hope this has helped your decision to come to Montreal or, if you are in Montreal already, I hope it has given you some excitement for living in this city! It is truly colorful and vibrant. 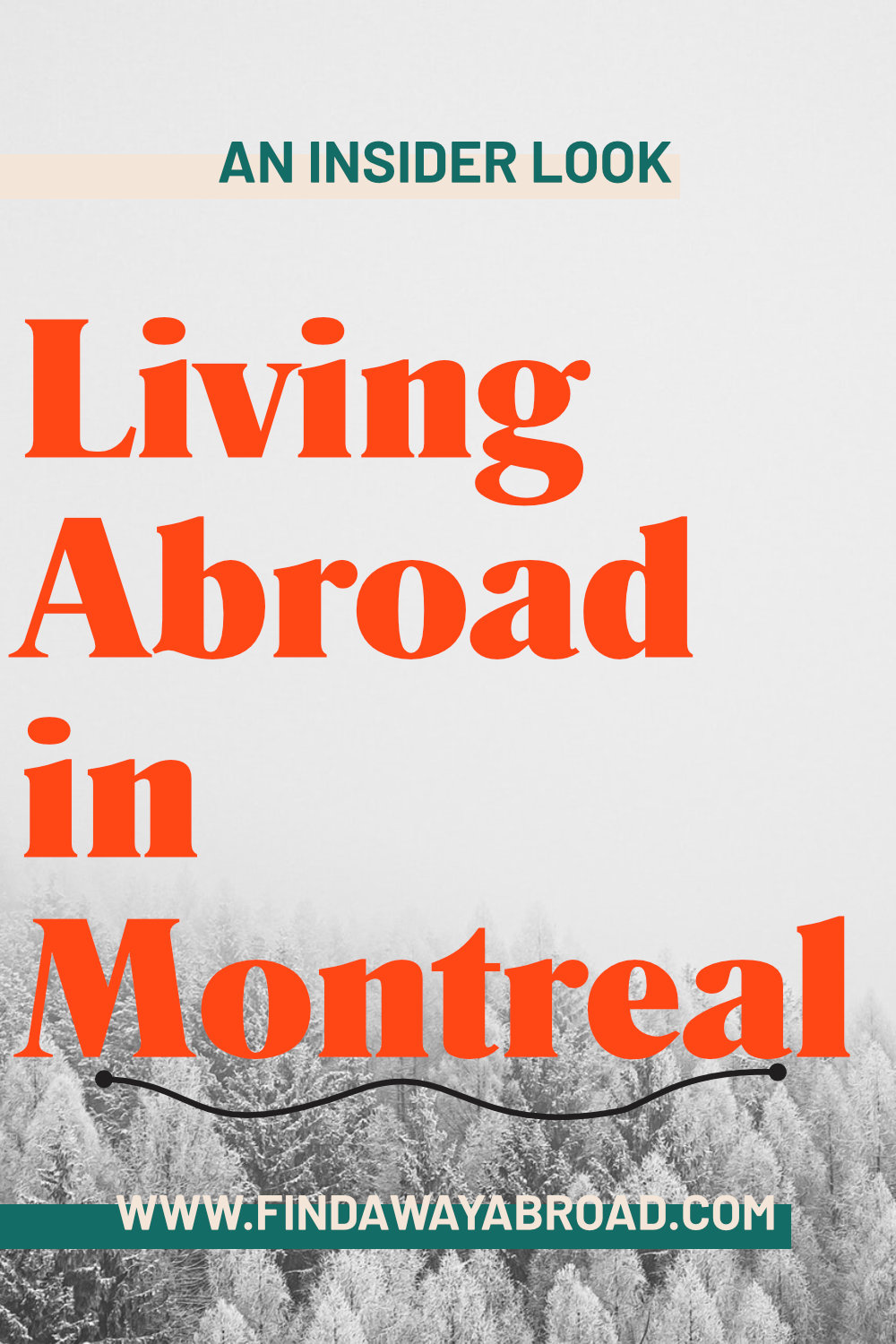 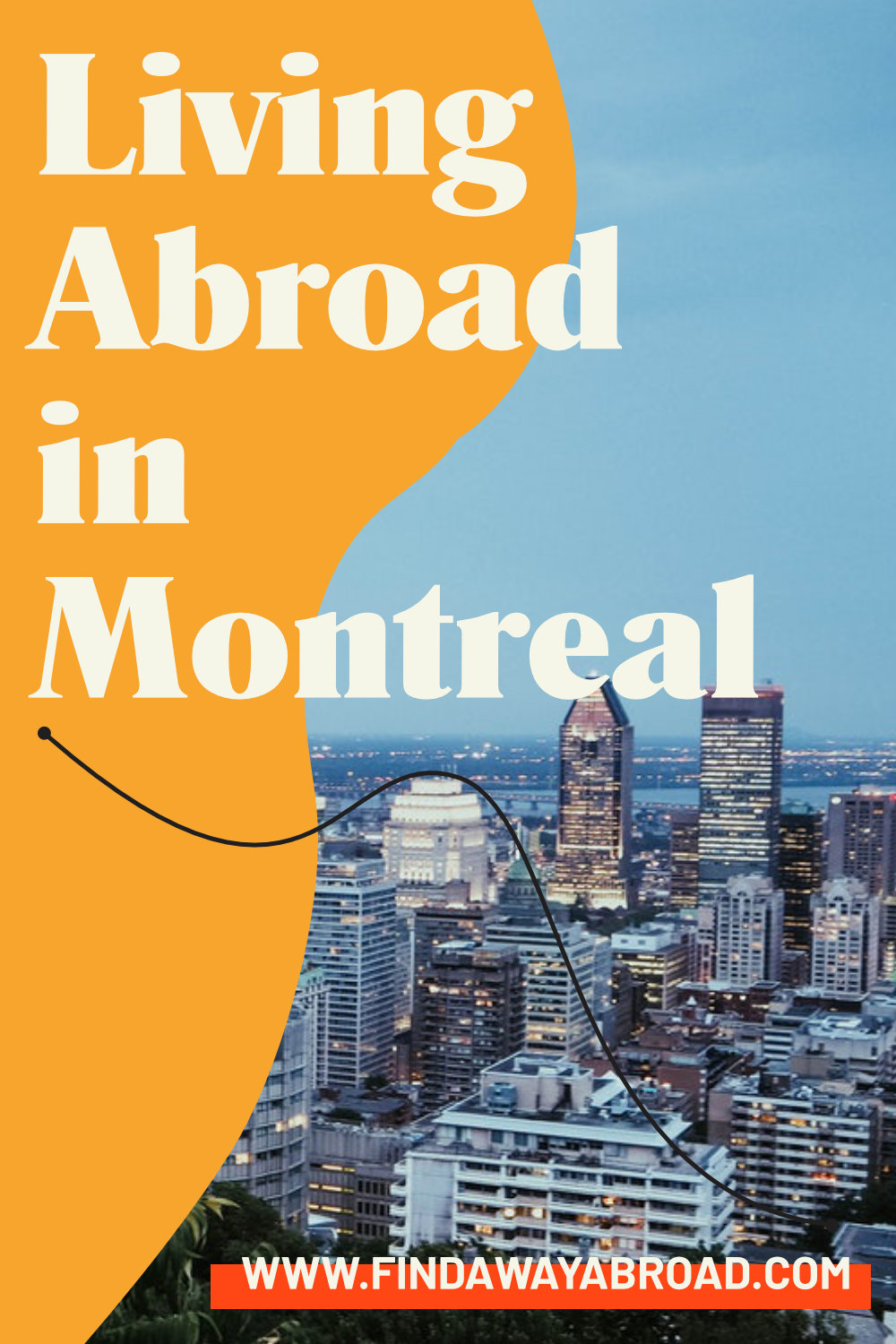