An Insider's Look at Teaching English with English First in China

Share
Tweet
Save
Already an expat with a helpful tip or story to share?
write for us!
Wiedaad Jappie
for those interested in

So you've already read Gone Working in China and have sifted through the variety of ways to teach in China?

It seems to me like you've chosen to teach at an English center. English First (EF) is an internationally acclaimed English center with offers throughout Asia and Europe but with a huge number of openings year-round in China.

Another option is to teach English in Hong Kong.

In terms of visa, there are 2 ways of getting into China. Some choose to get a tourist visa also known as a L-Visa and some opt for going straight for the business visa known as the Z-Visa. Most people who tend to go for the tourist visa option usually come to scout China out first. As you know China is not for everyone and having a tourist visa is a good way of getting a feel for the country. It can also help you to figure out where you want to be situated more or less. China is huge and each province is different from the next.

Requirements for a Z-Visa (Business Visa):

Still in need of a TEFL/TESOL certificate?

Get an online or in-person certificate from ITTT (International TEFL & TESOL Training)! Kat, the A Way Abroad founder, took their 120-hr online course with tutor when she first started her journey abroad. Their course gave her the confidence she needed to teach classrooms of children around the world. Since then, she has used their certificate to get work visas in 3 countries around the world so you'll never have to doubt the authenticity of their training!

Use this special discount code to get 15% off all of their courses!

Requirements for a L-Visa (Tourist Visa):

With the L-Visa you are in control of where you will be situated.

Once you have found your future city, you will need to sort out your own accommodation for the meanwhile. In bigger cities, this won’t be a problem as there are many hostels and cheap hotels. In smaller cities or remote areas you may not be able to do be picky. From there you can start job searching in person.

Once you do find a job, your company will either provide you with accommodation or give you a monthly allowance towards your new crib.

I, though, chose to go with the Z-Visa because it was more stable and I knew I wanted to be in China, I just wasn’t sure of where I wanted to be placed. As mentioned before, China is huuuuge and just the thought of choosing a city gave me major anxiety as I have choice phobia so I let China choose for me.

Getting a Job with EF

Upon completion of my studies and TEFL course I was put in contact with a recruiter (On the Mark TEFL) who then set me up with interviews with a language center called English First. You do not need to go through a recruiter for EF, you can apply directly to them on their website. I googled the hell out of EF before applying and found them to be a reputable language center.

I then set up an interview via Skype, had the interview and the rest is history.

EF took care of all the paperwork which was sent via mail. The package consisted of:

I had to then read and sign my contract and take the letter to the embassy.

The embassy was surprisingly quick as they only need to see the invitation letter and your flight itinerary. You will be responsible for paying for your flight but at the end of your contract you are rewarded with a flight allowance. You will then be issued with a single entry visa. You will need to pay for the single entry visa which costs around $50 USD.

Once you have collected, signed and stamped all of your documents as required as well as gather any other documents that your school might have requested, you then need to send that package back to China and that’s it!

All you need to do now is wait for confirmation that your school has received the package, confirm on a starting date, pack and get ready for the adventure of your life!

I would recommend researching the city that you will be placed in beforehand as culture shock is REAL, also you will have an idea of what, where, who and how. You need to be VERY open minded before embarking on this journey as it can become very overwhelming upon arrival and yes, all the stories you’ve heard about China are probably true! Coming from South Afri

ca, it is honestly a different world out there. I chose to dive into it blindly as that is just the type of person that I am though. I have no regrets and made China my home for 3 years!!!!

Life as a foreign teacher at EF

I chose to go with English First because it was a well known brand with language centers all over the world.

‍Each center is run a bit differently to the next.

‍It just depends on where you are situated and if it is franchised or not. I was lucky enough to work for 2 different franchises as I lived in 2 cities and they were run independently in comparison to one another.

For my first year I worked in a city called Zhengzhou which was central China. It is a big city which grew from a tier 3 city to a tier 1 city in a span of a year! Zhengzhou was amazing but is very VERY polluted. It is one of the most polluted cities of the world, not to mention very crowded. There were many foreigners in the city and it's quite western friendly. As i mentioned before EF is a language center which means the school was open for business in the evenings.

My working schedule would go as follows:

During the week teachers had to be there from 16h00 even though classes did not start till 18:30. We were required to be there for office hours before our classes started. We would usually use this time for admin, such as lesson planning, marking etc. Classes would then start at 18:30 until 19:30 with a 15 min break in between classes and next class would start at 19:45 until 20:45. During the week you would essentially only teach 2 hours each night.

Weekends were a bit tough though as we would start at 8h00 and we would have 3 classes in the morning and then a 2-hour lunch break followed by 4 classes in the afternoon. So you would finish around 18h00-19h00.

My “weekend” was a Monday and Wednesday. Some teachers got 2 consecutive days off in a row. I was one of those unlucky few who had theirs split up.

The schedule was quite chill during off peak season as you had mornings off and if classes were cancelled, you were allowed to go home. Peak season on the other hand was a whole new ball game. As a foreign teacher, we were required to teach 40 hours a week which is why we had to do office hours during off peak season to make up the time.

However, during summer and winter course you worked ALL of those hours which meant you worked either morning and evening shift or afternoon and evening shift with one off day. Summer course lasted 2 months and winter course was a month of intense classes. It was brutal and I may have lost my mind a few times. I only managed to stay in Zhengzhou for a year as pollution was so bad which ultimately forced me to move. ‍

I chose to move to south east China to a city called Taizhou.

It was very small city which was less polluted and less crowded. There was not a lot of foreigners in this city and even less foreign amenities. The school was run completely different as we did not have office hours and only came in 30 mins before our class to prep.

On weekends we worked 2 hrs in the morning and then had a 2 hour lunch break then 2 hours in the afternoon followed by another 2 hour dinner break and 2 hours in the evenings. Essentially, you work from 9h00 to 21h00 .
‍

‍My weekends fell on Tuesday and Wednesday and what was even better was that all foreign teachers had these days off so we could travel together.

Taizhou was so convenient for travelling as it has a direct high speed train to big cities such as Ningbo (40 mins away), Hangzhou (2 hrs away)  and Shanghai (3 hrs 15 mins away). Summer and winter course ran pretty much the same as weekends 9h00 until 21h00 everyday. However, we still got our 2 consecutive days off which helped a lot.

If you are new to the teaching industry, EF is a great school to start out with as everything you need is provided.

Your lesson plans are so detailed that it is impossible to mess up. In each lesson plan you are given an exact description of how you should execute your lesson, time allocation for each task and which specific flashcards you needed to use for your lesson. Summer and winter course may have tested my sanity but after completion it was smooth sailing until the next round came along.

Another reputable, international English center to check out is working with APAX. They run a similar strategy as EF and also have centers throughout Asia.

In a nutshell I think that China is a great way to start out your teaching career.

‍If you are already in the industry even better! If you enjoy being challenged and opt for the less mundane side of life then China is definitely for you because if you can survive China, you can make it anywhere in this world!

Good luck and Jia You! 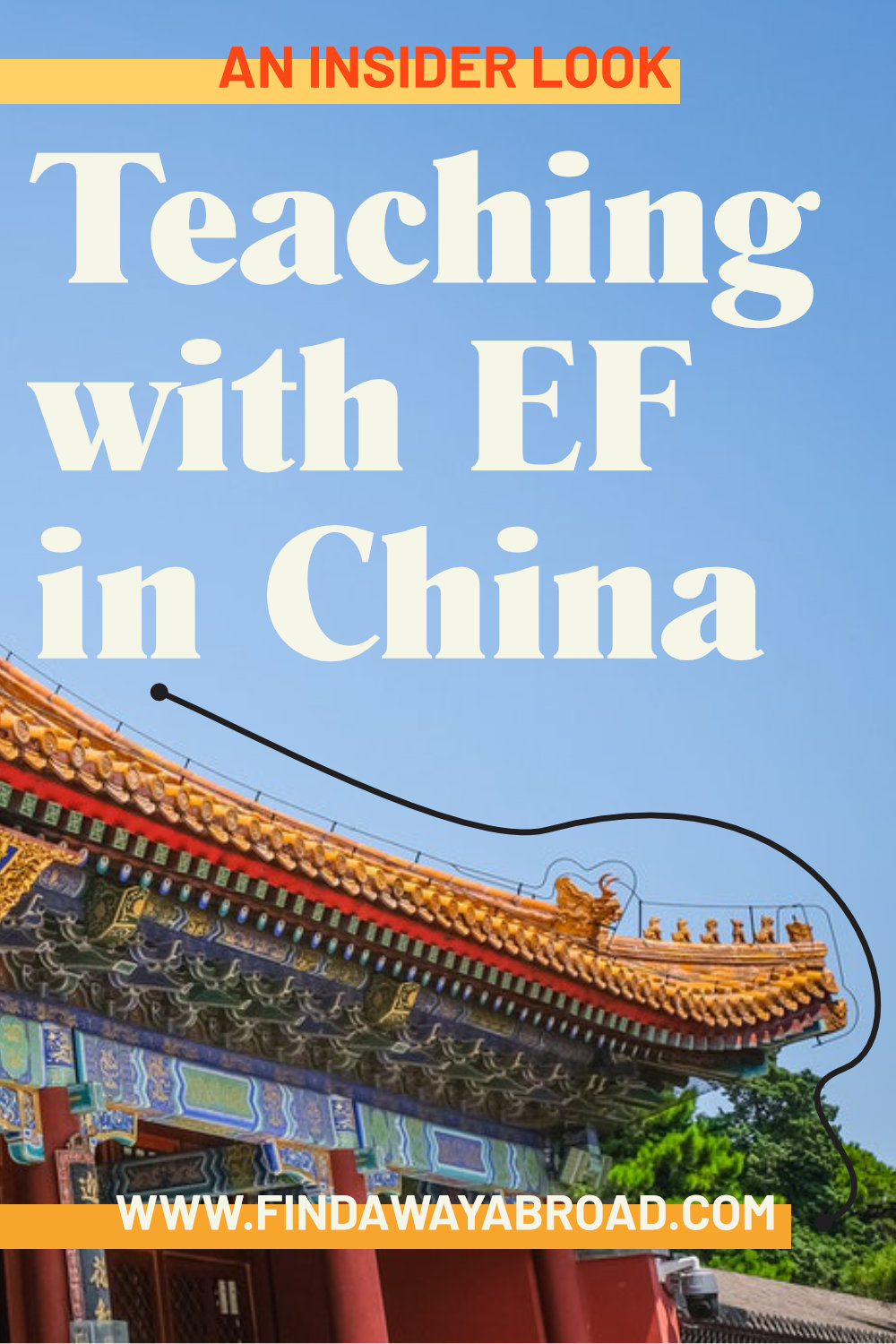 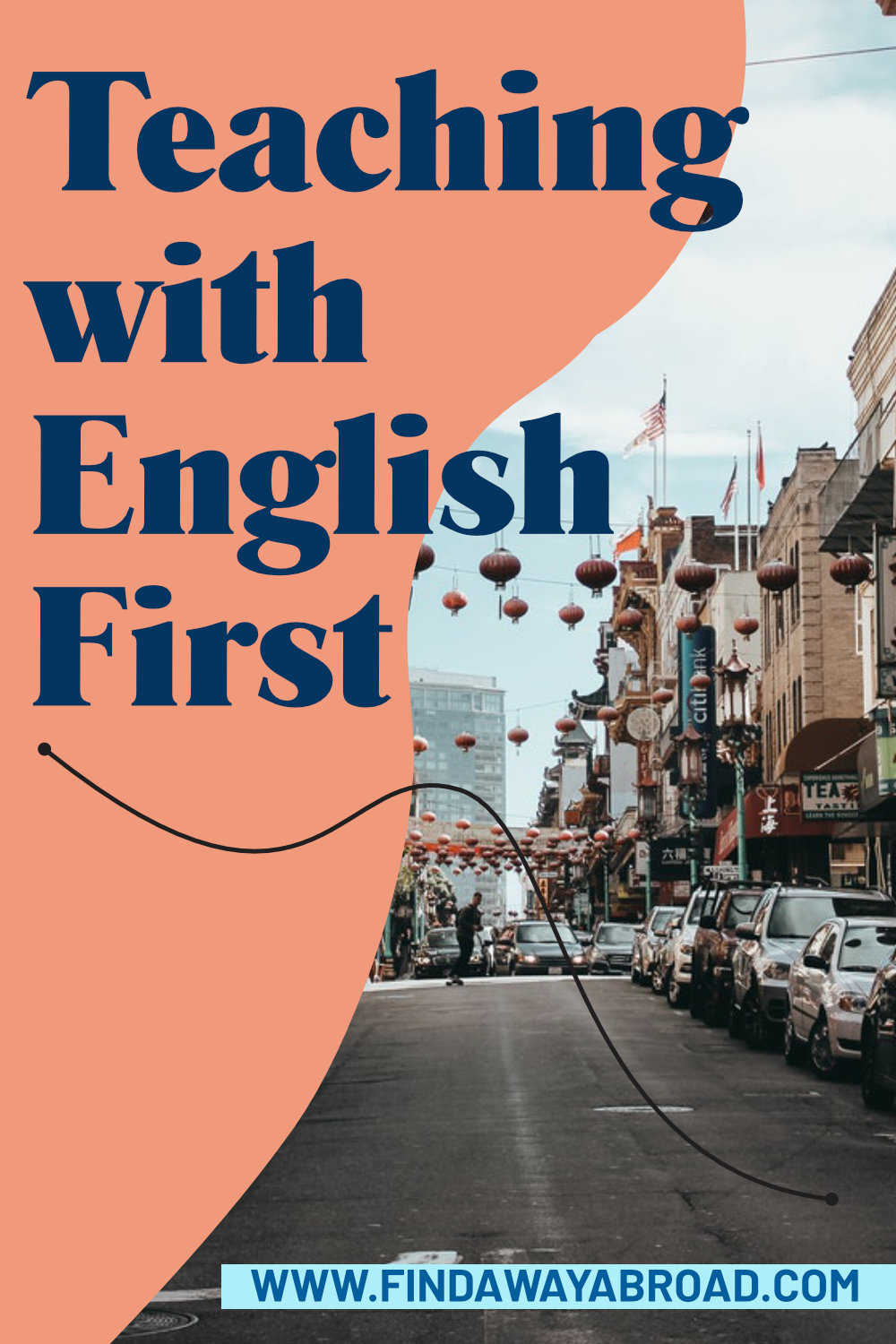