Welcome to Part 2 of the Expat Series aimed at giving you a realistic peak into expat life. In this part, we'll dive into hilarious moments that can only happen when you're in a foreign country, navigating a new language and getting a hang of cultural differences.

Did you miss Part 1? Dive into 15 hard truths that most expats don't talk about.

After talking about the downsides of living abroad, it's time we lighten things up. We asked 10 women to share their funniest moments abroad. Here they are!

1. The One That Hooks Up

“I had been living in Ecuador for about a year in this super small town. My Spanish was pretty good but not fluent and while I thought I knew what was going on most of the time, that wasn't always the case.

My friend (another gringa lacking Spanish skills) and I were walking down the street when another friend approached us. We didn't know her super well but enough to stop and chat. She invited us to a party where she was clear on saying a lot of cute boys would be at. We weren't on the prowl but parties are fun so we said ok. She continued to talk about the party and what we liked to do at parties, asking if we liked to dance, drink, etc.

We never turn down a good snack so quickly responded, "Yeah! We love eating!"

Mind you, we were on a busy sidewalk and we were the only 2 foreigners who lived in this town so people were dropping in to listen. Not to worry, there's no shame at enjoying the snack table at a party!

Well, I hate to admit it but that conversation got stretched and far too many people overheard it. We were used to people giggling at us because we spoke Spanish like 3-year olds so didn't pay much attention.

Finally, another mutual friend, after getting her share of the fun, explained to us that the question wasn't asking us if we liked to eat food but rather if we liked to hook up.

So while we thought we were having an innocent conversation about eating food, what the town heard was, "I LOVE hooking up" and "I hook up multiple times at parties" and "No, we're not picky but will take whatever looks delicious."

......yep. We lived there another year and a half and never quite lived that one down.”

2.The One With The Overnight Train

“When I was 19 I was InterRailing in Europe with a friend. One night, we hopped on an overnight train from Krakow, Poland, to Bratislava, Slovakia.

Or so we thought.

What we didn't know, is that the train split into two part-way through the trip, and our half wasn't going to Slovakia at all.

We were fast asleep when this happened so when we woke up and got off the train in the morning we had no idea that any of this had happened and we assumed we were in Bratislava. It was only when we left the train station that we realised we were actually in Prague, Czech Republic.

It took me another ten years to finally make it to Bratislava (it was worth the wait).”

3. The One With A Fruit God

“It was my first time living in Shanghai and I wanted to buy 2 oranges. I pointed to the oranges and said “2,” the lady said, “No oranges. No good.” and gave me 4 pears instead. I didn't argue with her cause clearly she knew better than me on what I wanted.

I always left the grocery stores with other fruit than I originally wanted to buy.

I loved it, figured it was up to the fruit lady Gods.”

4. The One With The Cycling Saviour

“If there is anything I have learned from living in Vietnam, it is that Vietnamese people are super helpful.

My partner and I had just moved to Da Nang and were in search of a furniture store we found on Google. Another thing to add is that addresses in Vietnam are never what they appear to be. Just because you have the address, it does not mean you know where you are going. X marks the spot, but not necessarily the treasure.

So we got to the supposed address in the outskirts of the city and, to our measured disbelief, there was no furniture shop anywhere to be found.

Moments after our arrival, our saviour pedalled around the corner. An elderly man, probably in his eighties cycled towards us, beaming, he gestured to follow him. And we did. We found out just how slow a motorbike could go as we followed our Moses in pajamas around the residential neighbourhood. He turned around to wave every couple minutes to make sure that we were keeping up.

About 10 minutes past and he led us to our destination, the main road, to go home.

He waved goodbye and we bought a table off Facebook.”

5. The One That Learned Ignorance Is Bliss

“I moved abroad and a group of younger men became my core friend group. One, in particular, and I were best buds. Six months into living there an incident happened that had me a little rattled and scared, so wherever my buddy was, you'd find me.

One Monday morning one of the guys asked what I had done that weekend, so I told him that me and my bud had gone out, naming off the clubs we had hit except the one I had never been to before and I had not seen a name on it. It was not in the normal tourist area with people packed in dancing and music that could be heard a block away.

This place was clearly much more local. There were men just sitting on barstools with much less party energy and quieter music. My friend had greeted people in the local language, which I don't speak, and proceeded to a darker back room, where there were only a few people and the music was more appropriate for dancing.

As I'm describing this place to my friend that Monday morning, he stops me and says, "Did he take you to the whore house?" I said, "I don’t think so."

I proceeded to describe where it is located, and he looked at me and said, "Kristy, he took you to the whore house."

Suddenly things made sense to me like the very large woman standing in front of an even larger man sprawled out in a chair, with his hands hiking her shorts up her butt crack and licking her behind, the beautiful girl that was dancing with a not so attractive man that she seemed very uninterested in yet she plastered a fake smile on her face and tried to hold him a bit away from her body, the stripper pole off to the side (not in use so it made it easy to dismiss in my mind), and how long it took my friend to return to the main bar to get drinks.

I was suddenly conscious of the eyes that had been on me as I walked in; it was like in the movies when the music screeches to a halt and all eyes turn to look at you. I'm used to not blending in since I'm very tall compared to most of the women there, so I downplayed it as normal. I realized then no one had bothered me only because I was with him and they assumed I was one of his women.

Sometimes ignorance is bliss and leads to great memories of things you'd otherwise have not experienced if you had known what you were getting into.”

6. The One Who's Still Waiting

“New expat in South Africa: met some nice ladies at my son's school. We started chatting in the car park while waiting to pick up the kids. Some of them mothers were so nice, they said, "we MUST meet for a coffee.”

Still waiting for those invitations to happen.

“It took me a while when I moved to Spain to understand that 'years' (año) was pronounced differently than anus (ano).

So yes, I did end up telling a doctor that, “I had 44 anuses” and another time asking, “how many anuses the warrantee for a printer was for.” I still feel sick when I think of it.”

9. The One That Likes To Sing

“I live in a Muslim village and during Maghrib (evening prayer), I was singing at the TOP of my lungs in one of the buildings and when I came out everyone was looking at me weird and I didn’t know why.

My Malaysian friend pulled me aside and was like, "Umm, it’s okay, it's okay, but just so you know its kind of weird to be like really loud during prayer times in the village." Soo embarrassing!”

8. The One With the Phrase Book

“First day in Vietnam. I had bought a Vietnamese phrase pocketbook before arriving and was feeling confident that it would be my best ally (ha).

Went for phở and tried to order the bill, only to have the server answer to me in Vietnamese and I didn’t understand anything until he got the calculator to show me the price.”

9. The One That Likes To Sing

“I live in a Muslim village and during Maghrib (evening prayer), I was singing at the TOP of my lungs in one of the buildings and when I came out everyone was looking at me weird and I didn’t know why.

My Malaysian friend pulled me aside and was like, "Umm, it’s okay, it's okay, but just so you know its kind of weird to be like really loud during prayer times in the village." Soo embarrassing!”

10. The One Who Took The Wrong Bus

“I had just arrived to Fusagasugá, Colombia to teach English for the year, I’d finished my day of classes and was about to take a bus to head back home. A bus drove by with the sign in the front window of the place I was going to so I waved and hopped in.

20 minutes later we’re heading in a different direction until I’m the only one left on the bus and the driver turns around and asks me, “Where are you going?” I’m super confused at this point and let him know that I was going to the place on the sign.

He takes a look at it and says, “Oops I should have turned that around,” then he asks exactly where I need to go and tells me to hop in the front seat, so I do and we head towards my place.

He’s super chatty by now and by the time he drops me off he asks for my number. Typical…”

The ability to laugh at yourself and take the moments too seriously are a huge part of having a successful life abroad. The point is never to laugh at or get frustrated with the culture or language you don't understand but to take it all in stride. Know these are learning moments and hilarious stories for you to share.
‍ 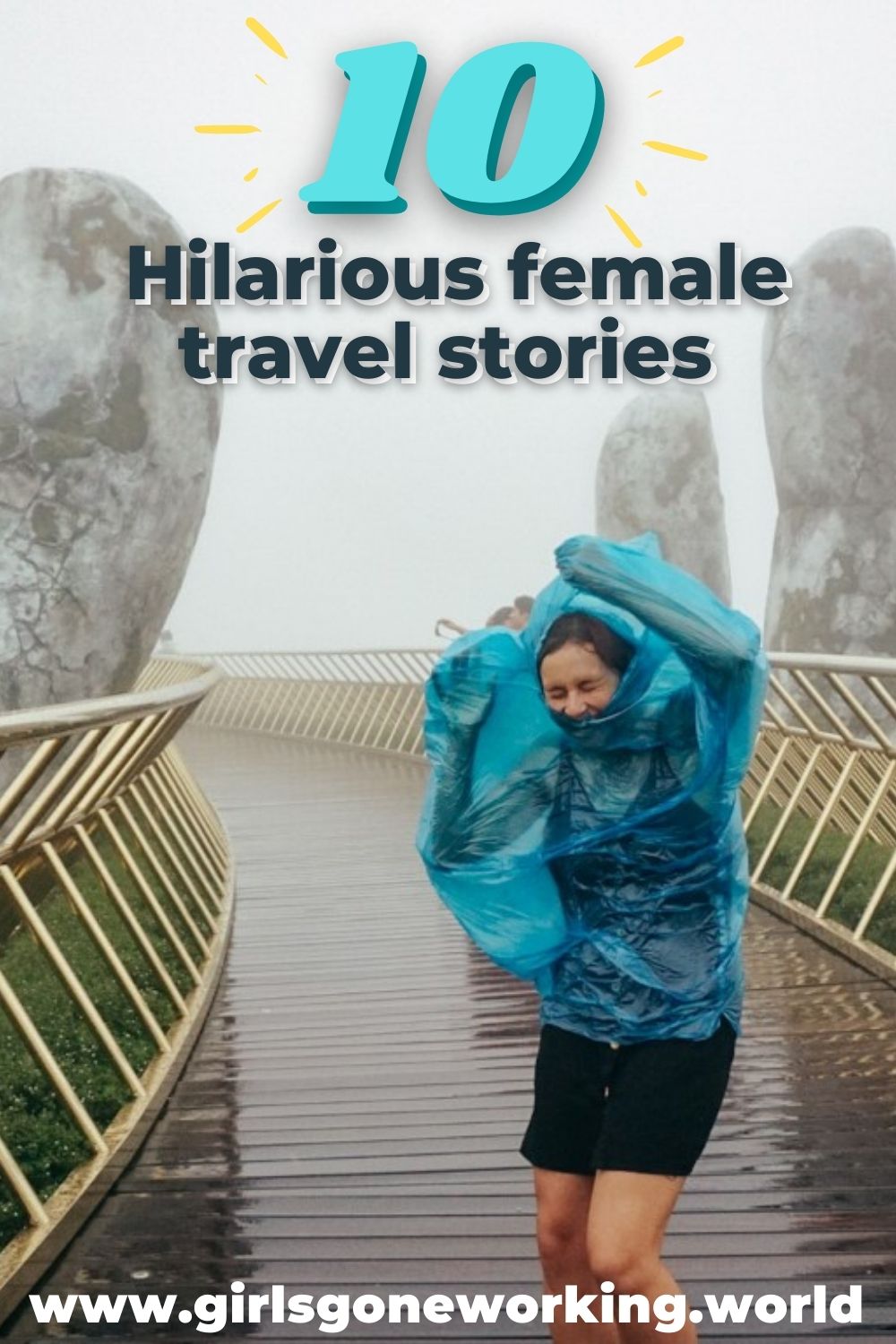 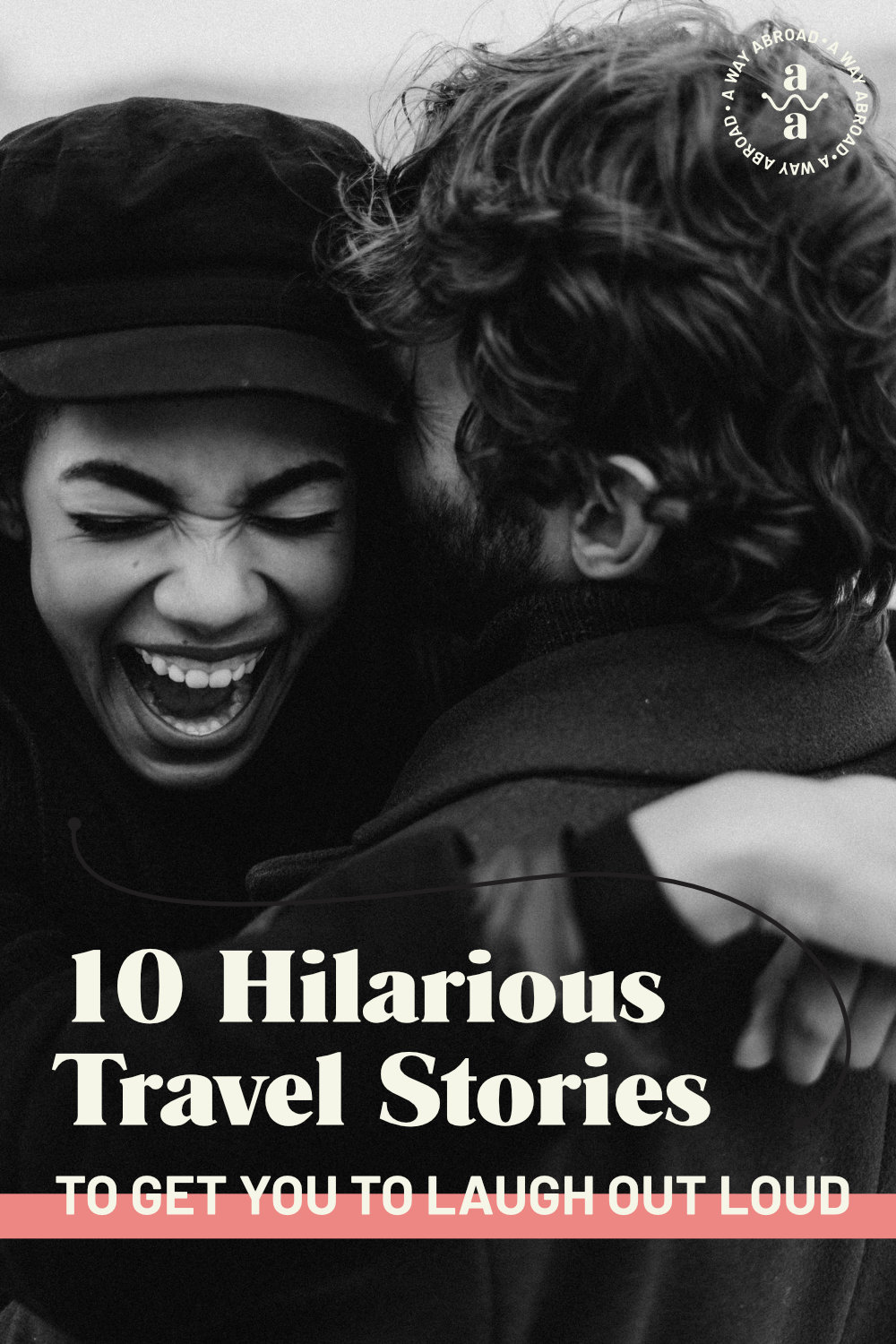